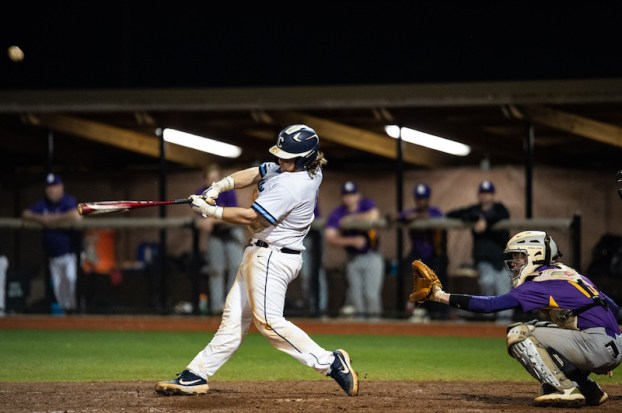 The Calera Eagles were able to pick up a thrilling win over Chilton County thanks to a walk-off home run from Mason Blankenship after the Eagles had fallen behind by one run entering the bottom of the final inning. (File)

CALERA – After holding Chilton County scoreless for the first six innings of a matchup on Monday, March 9, it was all for naught when the Calera Eagles gave up four runs in the top half of the seventh and final inning to go from up 3-0 to down 4-3. But, thanks to a couple of trustworthy hitters ready to step to the plate in the home half, that shift in momentum didn’t last long.

Through the first six innings of play, the Eagles had been the better team, not giving up a run while scoring three themselves. While they struggled in the field in the top of the seventh by giving up four runs, the offense still had one more crack at the plate and made the most of that opportunity.

While Calera was set to start the inning at the bottom of the order with Kobe Prentice, the Eagles also had the meat of their order set to step to the plate as well, knowing they would at least see Alijah Franklin and Matthew Windham step to the plate.

Now trailing 4-3 in a drastic shift having led the entire game, Prentice didn’t waste any time with a determined at bat. Having walked and scored a run already in the game, he laced a single between the first and second basemen to put the lead-off man aboard.

Franklin then laid down a beautiful sacrifice bunt that moved Prentice into scoring position with one out.

Windham stepped to the plate first and earned a full county after a wild pitch moved Prentice over to third base. One pitch later, Windham completed a perfect night at the plate by driving a hard ground ball through the left side of the infield for a single that brought home Prentice for the game-tying run.

Having already overcome the disastrous top half of the seventh, Calera didn’t just have the momentum back, but was able to be more relaxed knowing the game was tied.

That helped when Blankenship stepped to the plate and fell behind in the count at 1-2. Following a foul and another ball to make it a 2-2 count, the lefty grabbed the next pitch perfectly off the barrel of the bat and watched the ball soar toward the right-field fence.

He slowly walked toward first base watching the ball as it cleared the fence for a two-run walk-off homer to give Calera a 6-4 victory.

That completed an exciting final inning that featured seven combined runs after just three combined in the first six, all from the Eagles. Calera scored one in the first, one in the third and one in the fifth to take the lead, before Chilton wiped the deficit off the board in the top of the seventh.

Matthew Bullard got the start on the mound and went six innings, allowing just one hit and striking out four with five walks. Jaxon Butterworth pitched the seventh inning, and while he allowed the four runs to come home, only one of those was an earned run, while he eventually got out of the jam.

Windham led the way at the plate with a 3-for-3 game featuring three runs scored and two RBIs, while Blankenship was equally as impressive with a 2-for-3 performance featuring four RBIs and one run scored after hitting the walk-off home run.

Franklin, Butterworth, Cam Medders, Nikolas Delgado and Franklin each had one hit in the win.