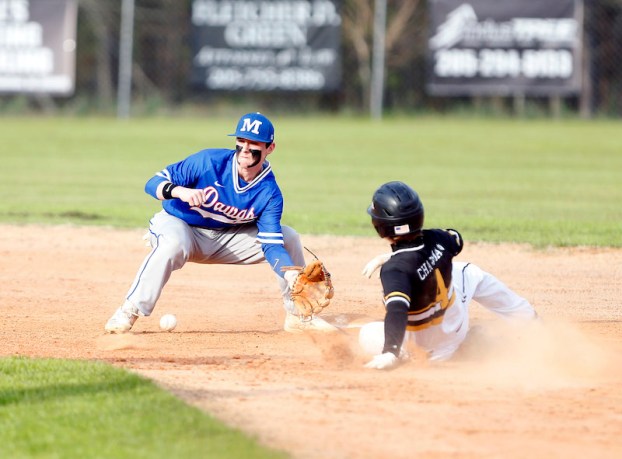 Montevallo took down Isabella 15-4 on Monday, March 9, to improve to 8-1 on the season. (For the Reporter/Brandon Sumrall)

Montevallo improves to 8-1 after dominant win against Isabella

The Montevallo Bulldogs improved to 8-1 on the season after a dominant 15-4 Monday night road victory over Isabella High School (2-4) on March 9.

The Bulldogs wasted little time putting points on the board when just three pitches into the game, Josh Mims launched a solo shot deep over the left field wall to give Montevallo an early 1-0 lead.

The Bulldogs were far from done, however, as an RBI single from Malik Holsomback along with a pair of Isabella errors aided in four more runs for Montevallo in the inning as the Bulldogs jumped out to an early 5-0 lead.

The bottom half of the first along with the top of the second came and went with no change in the score before the Mustangs warmed up the bats and removed the goose egg on their side of the board.

Three consecutive walks loaded the bases for Isabella with no outs, while a pair of RBI singles from Colton Conway and Micah Drinkard helped three runs cross the plate for the Mustangs during the half inning to cut Montevallo’s lead to 5-3 after two innings.

The top of the fourth inning saw Montevallo answer in a big way. An RBI triple from Grant Cordes along with an RBI double from Malik Inabinette aided in three more runs for the Bulldogs to help extend their lead to 8-3.

With Isabella unable to cut into the Montevallo lead, the top of the sixth proved to be the Mustangs’ undoing. A lead-off single from Robbie Gallagher, a hit by pitch to Inabinette and a walk to Brady Baugh loaded the bases for Montevallo with no outs.

Wesley Burnett followed with a two-RBI single, while a bases-loaded hit batter extended Montevallo’s lead to seven runs. An RBI ground ball from Cody Posey then extended it to eight, while a three run homer run from Cordes made it 15-3 going to the home half of the sixth.

Isabella could only muster up one run in the bottom half, which led to the mercy-rule 15-4 win for Montevallo in six innings.

Wesley Burdett tossed the final four innings of the game on the mound for Montevallo, allowing one earned run on two hits with a walk and a strikeout.

Mims picked up one hit and had two RBIs, as did Burdett. Baxley Shores also added an RBI along with Jay Dreyer.

By ALEC ETHEREDGE | Managing Editor CALERA – After holding Chilton County scoreless for the first six innings of a... read more