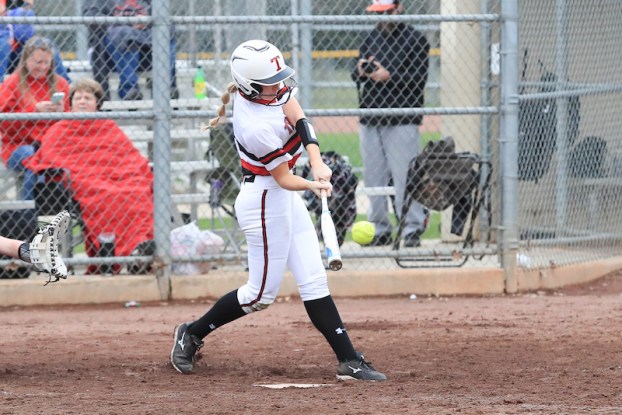 Thompson started area play with a 4-3 victory against Hoover on Monday, March 9. (For the Reporter/Dawn Harrison)

ALABASTER – The Thompson Warriors’ bats came alive in their final at bat to close out a rivalry win over the Hoover Buccaneers 4-3 on Monday, March 9, to start area play 1-0.

Thompson bounced back with the long ball at home after being shut out in their last outing against Pisgah. Hoover put the pressure on early, making the Warriors pay for an error earlier in the inning with a two-run home run to jump out to a quick 2-0 lead.

The Bucs added a solo homer in the second inning to add to Thompson’s deficit, but the Warriors ready to respond in the bottom half.

Laney Williams was hit by a pitch to lead off, but trotted home two batters later as Lindsey Cook blasted a home run over the left field fence to cut into Hoover’s lead and make the score 3-2.

Thompson (12-5) threatened again in the third, putting two on base with Lauren Cabiness advancing to third, but a fly out ended their chances. The Warriors’ defense came up big with shortstop Dailynn Motes fielding a double play in the innings as well.

Pitcher Holly Sellman popped up every batter in her last inning for Thompson and finished by allowing three hits and two earned runs with a strikeout.

Eleanor DeBlock performed admirably in closeout duty and was rewarded with the win as she pitched three scoreless innings allowing just two hits on 41 pitches.

Cook came up big again, this time in the sixth inning, doubling with one out, but it was Kendall Channell’s turn to make some noise. Coming in as a pinch hitter, she wasted no time taking the first pitch she saw deep to left field to give Thompson a 4-3 lead.

Needing just three more outs to cap the comeback, DeBlock finished the job with a groundout, a fly out and a line out to seal the victory.

Cook led the Warriors with two hits, two runs and two RBIs, while Ella Pate collected two hits as well. Channell finished 1-for-1 with two RBIs and a run scored, while Williams, Madison Poplin and Cabiness each added a hit.

By ALEC ETHEREDGE | Managing Editor The nation’s No. 9 ranked football player made his college commitment on Monday, March... read more