MONTEVALLO – Local author Bill Plott has published a book detailing the history of the Birmingham Black Barons baseball team and the players who comprised its roster. 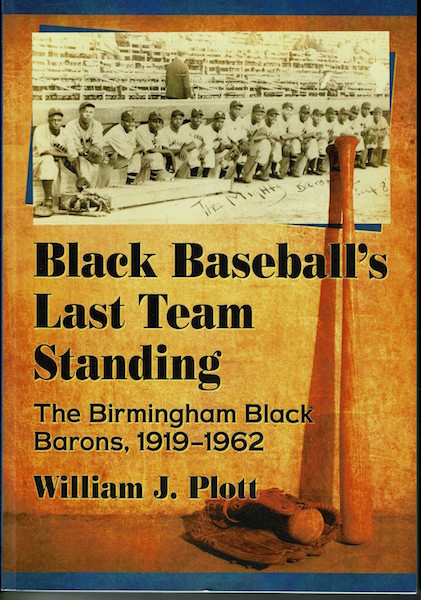 “I think it is an informative narrative that will be interesting to baseball fans, but also to anyone interested in history because the story spans a large portion of the 20th century, including such events as the Great Depression and World War II,” Plott said. “For a lot of African-American families this may be a resource for verifying whether or not a grandfather or uncle or some other relative played in the Negro leagues. The book includes an all-time roster of more than 1,000 names of former players, managers and club officials.”

A lifelong sports fan and long-time sports historian, Plott has penned other books in the sports history realm. His first book was a history of high school football in Calhoun County, published while he was working at The Anniston Star. He also wrote high school football histories of Shelby County and Clarke County, as well as a history of the Alabama High School Athletic Association state basketball tournaments.

“I really enjoy doing research,” he said. “It’s like following the clues in a good mystery novel or putting a jigsaw puzzle together. You collect all of this material and put it into an interesting and presentable form.”

He said his Negro league research and two books were inspired by Robert W. Peterson, who in 1970 published a book called Only the Ball Was White.

“It was the first book ever written on the Negro baseball leagues, and it spawned dozens of others including mine,” Plott said. “I had the pleasure of meeting Bob Peterson at a conference some years ago.

“He certainly inspired me to start researching the Nero leagues. This was especially true when I realized that no one else was studying the teams that opened in Alabama, like the black Barons and the Montgomery Grey Sox. It was exciting to know that I was breaking new ground, doing something nobody else had done.”

Although Plott’s initial interest in the Negro leagues started in 1970, he didn’t delve into the book project until about 1992, when he started seriously researching and accumulating information.

“By the time my first book, The Negro Southern League, A Baseball History 1920-1952, was published in 2015, I had spent 23 years putting it together,” he said. “The groundwork for that book made this one a little easier to finish.”

Plott said he encountered surprises every time he talked with an old ball player or researched a ball game in old newspapers.

“The biggest surprise was likely the one that produced the title, Black Baseball’s Last Team Standing,” he said. “I discovered that the Birmingham Black Barons apparently won the final Negro American League playoffs in 1961 and 1962. I discovered that two of the former Black Barons were residents of Montevallo, where I live. Two of the baseball and softball fields at Stephens Park are named for them, Clifford Dubose and Ray Haggins.”

Except for three brief interruptions, the Birmingham Black Barons team played until 1962, making it one of the most durable of the black teams.

It is available as a trade paperback and in e-book versions.

Plott said he has several copies he will inscribe upon request.

HOOVER – About 200 supporters and families impacted by the Angel Warriors Foundation showed up to take part in the... read more