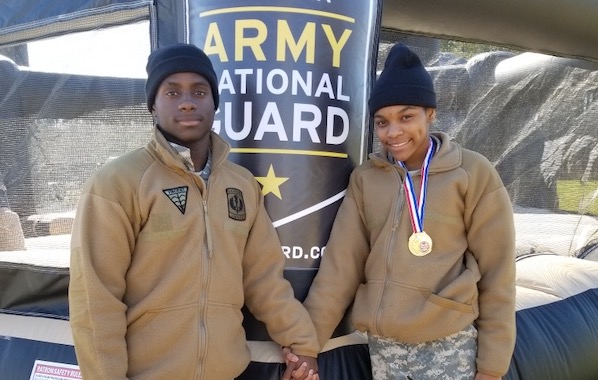 Traveling to Tuscaloosa, and hosted by Brookwood High School, the students from Vincent participated in what is known as the Raider Ruck Race. The “Raider” is a popular athletic competition held within Junior ROTC programs around the United States. It is the Army ROTC “Ranger” college competition equivalent.

Generally, the Raider Rucksack Race is a 4.1-mile-long foot race consisting of a series of hills and rough terrain with three stations in between. The stations test the teams: their capabilities to work together, their physical core abilities and their decision making under extreme pressure. “Slow and steady wins the race,” according to Cadet Eli Cato.

By all accounts this is an intense competition with one of the most stringent rules being that in team competition, members must stay together. Team members start together and finish together, or the team is disqualified. Cadet Gavin Hardin said, “This was about learning to work as a team.”

According to JROTC instructor CSM (Retired) Mary Kyser, “This was a regional competition. We are a 2A school; our students were competing against 6A and 7A schools.”  Not to worry, according to Cadet Joseph Nuzio Valenti, “We’re little but we did it all!”

Perhaps awareness about a rucksack will help clarify the intensity. First, it is not a backpack.  Rucksacks have military origins carrying heavy loads over long distances and time periods.  “Rucking” is the foundation of the U.S. Army Special Forces training. These students used 25-pound sandbags as their ruck sack.

This timed race stopped at the second station long enough for some training on construction of a rope bridge and how to tie certain knots—all leading to the challenge of crossing the bridge safely and the timer starting again. Apparently, determination is involved. Cadet Alysha Faith Maxwell said, “Even when you fall on the one rope bridge, never give up.” Cadet Maxwell was the only female in the race.

Vincent students finished 10th out of 19 teams. In addition to the team competitions, there were individual obstacle course competitions. Each school could have one male and one female.

Cadet Keaerria Lykes came in first place in the Obstacle Course Competition, saying, “You have to give it all you got, even when you don’t have much left to give.” Tae McGregor posted the fastest time at 42 seconds. Wow!

Cadet Carson Spradlin said, “We started slow and finished strong!” And, Cadet Hayden Conley summed up the trip saying, “It was an amazing experience for the whole team.”

Mayors update goals and challenges for 2020 at luncheon

By ALEC ETHEREDGE | Managing Editor PELHAM – Mayors from across Shelby County gathered at the Pelham Civic Complex on... read more