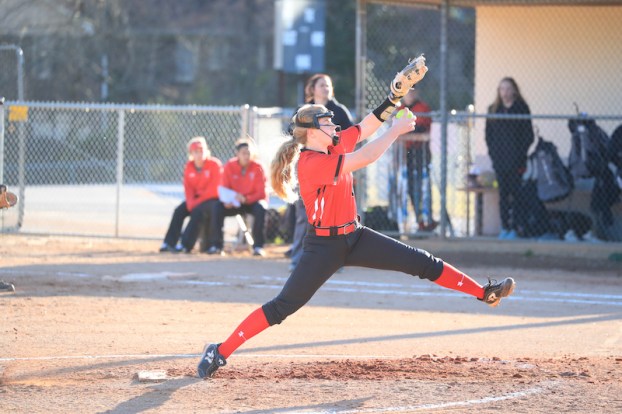 The Thompson Warriors grabbed their second area win of the week by taking down Oak mountain 8-5 on Thursday, March 12. (For the Reporter/Dawn Harrison)

NORTH SHELBY – The Thompson Warriors took their fifth win in their last six games leading a comeback effort on the road against the Oak Mountain Eagles in a key area matchup.

Jenna Williams and Ella Pate led Thompson with three hits and two runs each with three RBI combined in the 8-5 win. The Eagles jumped out first in the bottom of the second inning as Julia Tucker singled to lead off and jogged home two batters later as Sarah Katona homered over the center field fence for the 2-0 lead.

Thompson (13-5, 2-0) wasted no time launching their own offense as the first three batters produced hits for the Warriors. Haley Kennedy had a big single from the nine spot to open things up and was driven home immediately from Dailynn Motes’ triple. Motes was rewarded next as Williams singled to bring her home and tie the game 2-2.

The Eagles retook the lead in the top of the third as a leadoff error put Elizabeth Zaleski on first. A sacrifice bunt and two singles later, Grace Hummel brought her home for the 3-2 lead.

Neither team scored in the fourth inning as Holly Selman finished off her night on the rubber with four innings allowing five hits and two earned runs while striking out two.

Williams and Pate stepped up big with two outs in the top of the fifth inning with back-to-back jacks to take their first lead of the game at 4-3.

Oak Mountain (5-5-1, 0-2) would get to new pitcher Eleanor DeBlock in her first action of the night and drove in a game-tying run on a two-out single from Tucker, but couldn’t retake the lead.

The Warriors responded swiftly and, again, did it with two outs.

Lindsey Cook and Kendall Chanell hit a double and single with a runner on second to knock in two more runs for a 6-4 lead heading into the seventh inning.

DeBlock went 1-2-3 against the bottom of the Eagles’ lineup to get the Warriors back to the plate where they piled up a couple of insurance runs.

But DeBlock got the last batter on another grounder to seal the win for herself and the Warriors.

She finished with three innings pitched allowing four hits and one earned run with two strikeouts. Sullivan, Hummel and Tucker all led the Eagles with two hits while Catona’s early two-run homer gave her the team lead with two RBI.

By JEREMY RAINES | Special to the Reporter ALABASTER – The Helena Huskies and Thompson Warriors played a non-area matchup... read more