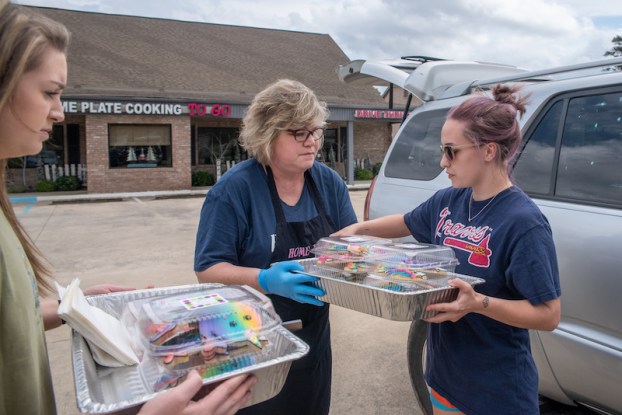 Kylie Anderson traveled to different baked goods shops to pick up items to deliver to workers at busy stores that are dealing with unusual hours because of COVID-19. She has also donated supplies to those in need free of charge. (Reporter photo/Keith McCoy)

Pelham local Kylie Anderson giving away supplies to those in need

PELHAM – Kylie Anderson has been spending most of her time over the past week buying, organizing and setting up at different locations to hand out supplies to those most in need during the COVID-19 outbreak.

Anderson explained that she decided to start helping because she saw many vulnerable people unable to get supplies that they desperately need due to shortages or because those people are unable to leave their homes.

“I’ve driven to a lot of people’s homes and dropped off supplies at their doors. Like people with cancer who are going through chemotherapy right now, elderly people, single moms who are working and unable to pick up groceries or meals for their kids,” she said. “I’ve really just been giving away stuff to people like that or to people who can find the things they need in stores.”

She is giving away items that are tough to find in store right now like toilet paper, water, bread, snacks, juices, hand sanitizer, feminine products, laundry detergent and soaps.

Anderson said she was able to find all of the items she’s giving away by traveling to multiple stores across the Shelby County area. Some of these businesses include Walmart, Publix, CVS, Walgreens, Pick ‘n Save in Montevallo and Brooklere Pharmacy in Alabaster.

While making her supply runs, Anderson said she became aware of the struggles that employees at these stores were facing and decided to bring pastries as gifts to uplift them.

“I’ve seen the way some of these retail employees have been treated and it’s really hurting my heart. I’ve heard people cussing at them and calling them names, and I just really wanted to lift them  up,” she said. “I picked up some pastries from Home Plate Cooking in Helena and delivered them to employees at those stores to show my appreciation for them”

Anderson explained that while she was able to buy some of these supplies on her own, she would not have been able to do it on this scale without the support of people in the Helena and Alabaster communities who have been sending in donations to help her.

Anyone interested in helping Anderson can do so by sending donations through Cashapp at $kyliebug2001 and Venmo at @kylie-anderson-40, or by reaching out through Facebook.

FROM STAFF REPORTS PELHAM – The city of Pelham has launched a COVID-19 central web-information page located at Pelhamalabama.gov to... read more