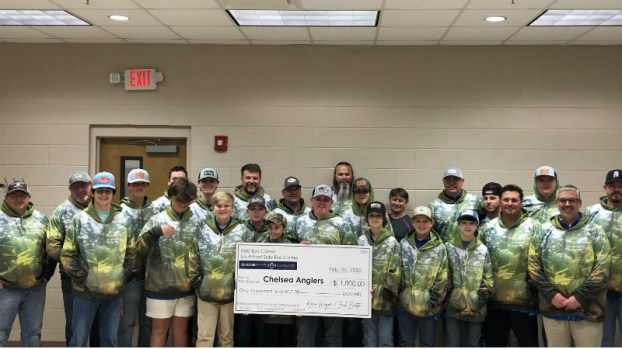 CHELSEA – The Chelsea High School fishing team has some new gear and needed funds thanks to a recent sponsorship by Southeast SideEye Camo.

Southeast SideEye Camo representative Kevin Wayne presented the team with apparel donated by the lifestyle line and a check for $1,000 on Feb. 20.

Wayne said that once he joined SideEye Camo founder Zach Burton’s effort, he began looking for a high school fishing team to sponsor. Some already had sponsorships, but Chelsea’s team was a perfect fit for the company to both make a positive difference and market itself.

“We knew we needed to get this in the hands of people who would wear this,” Wayne said.

Wayne spoke to the team at its meeting on Feb. 20, heard others talk about the sport and had another idea: shooting a video series featuring the anglers in action.

Wayne is an actor and founder of Film Farm Studios in Columbiana.

The show would be sponsored by Southeast SideEye Camo, Wayne said.

Zach Burton founded Southeast SideEye Camo after growing up with a passion for the outdoors.

“I grew up fishing,” Burton said. “We have an 8-acre lake on the property. I’ve always been passionate about the outdoors and camouflage in general.”

While trying to come up with a new design, Burton and his wife were outside taking pictures of how trees reflected on the surface of the water.

“As we’re taking pictures, we’re like, ‘Wait, that’s how we see the water surface, but that’s not how fish are seeing it,” Burton said about the idea to develop a design based on what fish see below the surface of the water. “There’s not a camo out there that’s based on a fish-eye view.”

Based in Cincinnati, Burton has filed for a patent, gone live with a website and is starting to see sales.

The products at SideEyeCamo.com—including hoodies and beanies—are all made in the United States with sublimation dye that makes the print long-lasting, and offer UV protection while being moisture wicking, water resistant and snag proof.