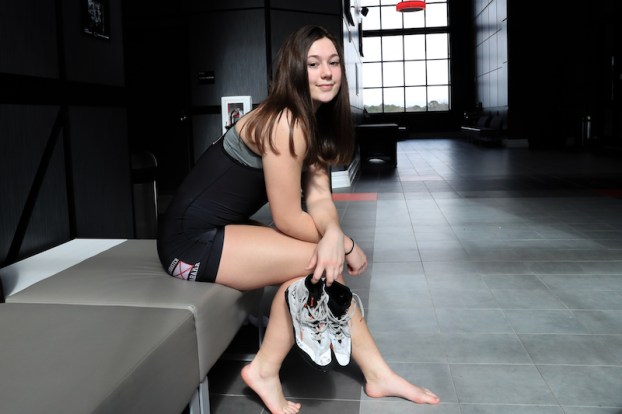 Several schools across the state are hoping girls wrestling will become a sanctioned sport by the AHSAA. (For the Reporter/Dawn Harrison)

There is a new brand of athlete emerging, breathing life into a sport that had been dwindling in numbers. All across the U.S. these athletes have tripled in number in the last 10 years, and now, there is a push for Alabama to give them a place of their own.

Throughout the 2019-20 sports calendar year, surveys landed on the desks of principals and athletic directors in the state of Alabama asking them which sport they would like to see sanctioned. Among the six sports on the survey was girls wrestling.

These surveys, sent out by the Alabama High School Athletic Association every two years, must have 10 percent of Alabama schools vote in support of a sport, which is approximately 40 schools, sport before being considered for sanctioning.

So is now the time for the AHSAA to sanction the sport of girls wrestling? Many think the answer is yes.

According to the statistics from the National Federation of State High School Associations, participation in wrestling by girls has increased from 6,025 in 2008-09 to 21,124 in 2018-19 across the country.

Remarkably girls wrestling has seen a growth of 27.5% in this past year alone, and the numbers could be even higher as eight states do not report their participation in the sport, with one of those eight states being Alabama.

Wrestling has seen growth for the last two years, while sports across the board has seen its first decline in over 30 years.

As the participation of female athletes grows, they are looking for a division of their own where they can compete to become state champions.  Currently in Alabama there are 46 female wrestlers in high school, and one of those wrestlers is Thompson High School’s Brynleigh Glover.

“I like how difficult it is to wrestle boys because naturally the boys are stronger, but I dislike not having that advantage and not having an equal setup,” Glover said. “But, I think it’s good that I started off wrestling boys because now I know what I could do.”

But being such a physically demanding contact sport that requires skill, determination and strength, a lot of matches come down to pure strength to determine a winner in close matches, which is a concern for many girl wrestlers, including Spain Park sophomore Yasmine Olivera who quit for that reason.

“I felt very challenged, which was a good thing at first, but wrestling with a bunch of guys messed with my head and I wasn’t winning as much as I was used to,” she said. “It was mentally challenging, but it was also draining. Wrestling in middle school against guys was a completely different story, and I thought high school wrestling wasn’t going to be much of change. At first I was doing good, but I got tired of not doing as well as I thought I would. If I had the opportunity to do it again with girls, I definitely would.”

Ask any high school wrestler and they will tell you that middle school wrestling is nothing like the competition they face now.

Like it or not, there is a difference between girls and boys. The physicality changes, the aggression and the strength are different, which leads to girls quitting many times because they lose the passion for the sport.

The playing field is indeed unequal. As more and more girls begin to wrestle across the U.S., they are not looking for system to lower any standards so that they compete, they are looking for an arena in which they can compete against equal talent.

“What we see here in Alabama and other states is that these girls start wresting in the clubs when they are little and they do fantastic,” said Julie Lassere, who is the chair of the Alabama High School Girls Wrestling task Force. “In many cases they beat a lot of boys because there are no physical differences at that age. But then puberty hits and the bets are off, and you get a lot of girls with injuries.”

Lassere is hoping change will come soon rather than later.

“There is a huge difference and it’s time for these girls to be on their own playing field with their own gender,” she said. “Boys vs. girls in wrestling is not a win-win for anyone. If you’re a boy and you lose, you have lost to a girl, and if you win you just beat a girl. And if you are too aggressive in beating a girl it doesn’t look good for you. Most boys have been taught to respect girls. Its already an awkward age and that makes it a lot more awkward.”

As with most programs the question about viability of the program with the state certainly has to be whether or not they can gain enough female wrestlers to compete against each other.

Traditionally touted as a male sport, most pitches by high school coaches are geared more toward peaking the interest of boys.  If a girl wants to be on the team she can, but she will have to practice with and compete against the boys.  The camaraderie that most teams enjoy often times alienate the females, albeit not intentionally.

The bonding happens where the girls cannot be present, like in the team locker room, or in hotel rooms on trips.

By offering the girls a place where they can compete against each other they are offering the girls an opportunity not only to become state champions, but also to take it a step further and perhaps be able to qualify for a college scholarship in one of the 60 plus colleges now offering women’s wrestling programs.

“The big question for many is how will a girls program be rolled out,” Lassere said. “Is this going to be a division vs sanction? If we sanction and create a whole new sport then the girls will not have the option at all to wrestle boys because they won’t have the numbers.

“So, what most states have done is add a girls division for approximately two years which is what it takes. Then after two years you say this is a girls sport now. It’s a three-year plan that allows some of the existing girls to wrestle the boys if they are comfortable. Other girls that say they just want to wrestle girls may not get as many matches but that’s OK. The goal is for the first year to have four major tournaments, plus add a girls division right along with the boys at state.”

Whether the AHSAA decides to follow neighboring states or hold off, there will still be something set up for the girls next year.

“No matter what comes back from AHSAA we are going to have something for girls in Alabama that want to participate in wrestling, and we are going to move forward with it,” Weltzin said. “It’s a matter of time and who wants to put some effort into making it happen.”