“Boy, I’ve had some fun,” said 67-year-old John Pruitt on the opportunities and adventures made possible through his military career. 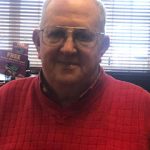 Over a seven-year period, international ventures took him from Huntsville, Alabama, to Bupyeong, Korea.

He held variety of positions from desk clerk to SWAT team member to postal clerk to assistant administrative NCOIC.

“We never go to bed mad,” he said. “Rather than argue, step away before it turns into a verbal fight. You can take a few words and destroy a marriage.”

Pruitt was born in Hersfeld, Germany, during the period that his father, a Korean-era veteran, was stationed there.

Pruitt retired from the Alabama Army National Guard in 2010 after 31 years of service.

As part of relief effort to storm victims, in 2005, the Guard manned the distribution effort of two tractor trailer loads of Tyson chickens.

Pruitt was the outpost commander for Royal Rangers from 2001-2008.

Royal Rangers is similar to the Boy Scouts, except they are more religion-oriented.

“I liked it right away. They play my kind of music,” Pruitt said.

Vietnam Vet Radio is a one-of-a-kind, internet-only radio station dedicated to the men and women who served in the Vietnam War, their families and friends.

With a few exceptions, all of the songs played are from the Vietnam War era.

The welcome message on the Vietnam Vet Radio Homepage states its mission: “Our mission is to heal, not open old wounds.”