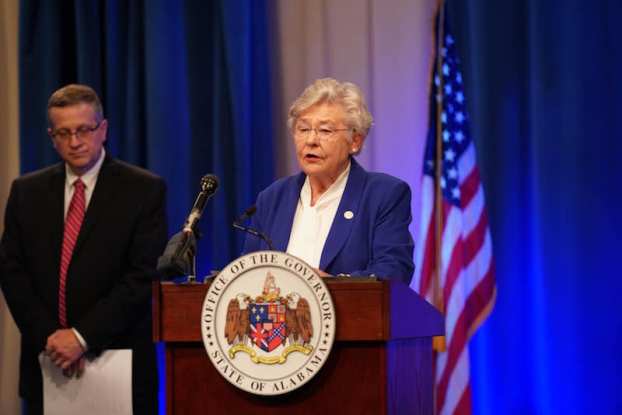 Alabama Gov. Kay Ivey said the stay-at-home order issued less than two weeks ago is working and that she is working on plans for reopening the economy when that time comes. (Contributed)

Ivey says order “is working,” asks not to let our guard down

MONTGOMERY – Less than two weeks after Alabama Gov. Kay Ivey issued a stay-at-home order on Friday, April 3, the governor said it is working at a press conference on Tuesday, April 14, and that we need to continue to follow the guideline.

“I’m grateful that so many people appear to be staying at home and taking the order to heart,” Ivey said. “All indicators suggest that it is working and I cannot over emphasize enough the importance, in fact it is imperative that we keep doing what we are doing. Now is not the time to let our guard down and pretend that things are back to normal.”

Gov. Ivey said many of the models her and the officials at the Alabama Department of Public health have been seeing suggest the efforts have been paying dividends.

That message came when there were 3,809 confirmed cases of the virus as of Tuesday morning at 11 a.m., including 73 deaths confirmed by the ADPH and another 32 reported deaths.

In the county, the numbers have risen from 107 confirmed cases to 230, but the number of confirmed deaths have remained constant at five.

Since last Thursday, the numbers have risen by close to 2,000 confirmed cases, but we are in the middle of what was expected to be the worst part of the virus’ outbreak.

“We have seen a lot of modeling change over the past week, even the past two days,” said State Health Officer Dr. Scott Harris. “Our predictions look a lot better than when we first thought when we were talking about this a month ago. At the moment, the numbers look as good as we have seen them, so we are very encouraged by that.”

Harris said the reason that has changed is because people are staying at home.

With positive signs, Gov. Ivey said there are questions about reopening the economy and how that will be handled.

“I recently asked Lt. Gov. Will Ainsworth to get the small business commission, which he chairs, to begin looking for ways where we can restart the economic engine for our state, especially small businesses,” Ivey said. “It’s not a simple process like flipping on a light switch, but the Lt. Gov. and this commission have been working to bring forward a set of recommendations that I trust will be valuable and helpful.”

Ivey said she hopes that she will have an update from that committee by this Friday, April 17.

She also said she is asking each of the seven members of the congressional delegation to look at the challenge on a district-by-district basis and setting up their own working groups and plans for their individual districts.

On or before April 28, Ivey said she and Harris will review plan of action before the stay-at-home order expires to outline a plan.

“Going forward, we’ll hopefully be able to give regular updates on what segments of the economy might be in a position to be able to open, including when and how, while also allowing our businesses, big and small, ample time to plan for a safe, responsible reopening,” Ivey said. “This will be a road map that will help Alabama begin our road to recovery.”

In the last four weeks, there have been more than 264,000 unemployment claims, which is a major shift from the 130,000 over the last year combined.

Ivey said she wants to open businesses in phases and smartly.

“What restaurants and bars need to do is different from what a manufacturing and retail stores need to do, so it will be phased in” she said. “We want to get folks back to work as soon as we can, but we want to do it as smart as we can.”