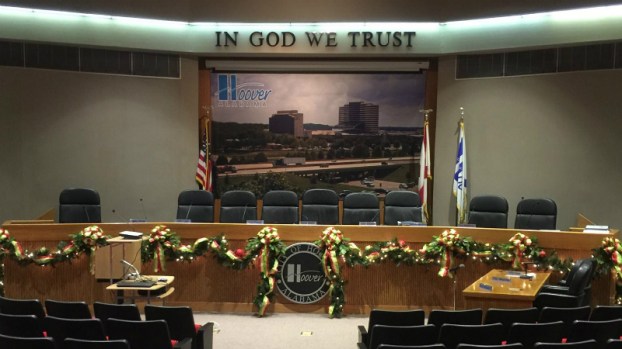 Hoover officials continue to find expenses that can be cut to balance a projected shortfall due to the COVID-19 pandemic. (FILE)

HOOVER – Continued efforts to cut expenses and a plan to form a task force to assist with reopening city facilities were among the updates given by Hoover officials to the City Council at its meeting on Monday, April 20.

Mayor Frank Brocato told the Council, which was meeting via an online platform, that he has been part of conversations with state and federal officials that included discussion about reopening businesses as the COVID-19 numbers level off.

Brocato said decisions would continue to be based on science and the recommendations of health officials, ensuring the health and safety of workers and patrons.

Councilman John Lyda will be one of the members of the task force, Brocato added.

The mayor also gave the Council an update on plans to balance the city’s expenses with an expected revenue shortfall between $8 million and $15 million.

“We’re continuing to work on our budget this year,” Brocato said. “We’re going line by line and department by department to make sure we’re eliminating non-essential expenses.

“As I promised a week or so ago, we’ll be delivering a financial update every two weeks.”

The midpoint dollar amount of the projected shortfall is $11.5 million.

Steps already taken to cut expenses by at least that much include eliminating travel and limiting purchases to only those deemed critical and subject to executive review.

Officials continue to identify other areas to cut from the operating budget. So far, about $1.2 million has been identified, representing 83 percent of a goal of $1.4 million.

City Administrator Allan Rice said officials had not yet met with all department heads.

Rice thanks the department heads and the city’s finance staff for their work.

Savings from unfilled positions, savings from canceled events and savings from overtime reductions are also among the cuts to operating expenses.

Those from unfilled positions and canceled events are about $132,000 above amounts projected during the plan’s initial presentation.

The bulk of the city’s savings is coming from delayed capital projects.

The savings presented April 20 was an increase of almost $2 million over the last presentation.

“We’re not done, and we’ll continue to pursue that $15 million figure as we go,” Rice said.

This story was edited from its original version on April 22 to correct that a task force is being formed to assist with the reopening of city facilities, not businesses as was originally reported.

By ALEC ETHEREDGE | Managing Editor In the last 24 hours, the number of confirmed COVID-19 cases in Shelby County... read more