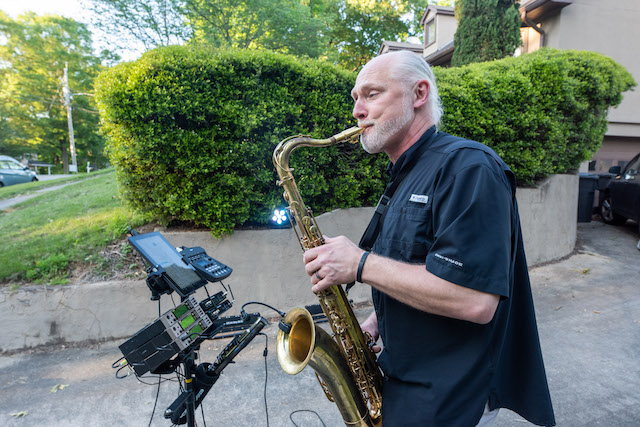 ALABASTER — Live music is one of the luxuries people have given up as Alabamians observe social distancing in the midst of Gov. Kay Ivey’s stay-at-home order—unless you happen to live near saxophonist Jerry Robbins, that is.

Robbins, a saxophonist who frequently plays gigs at weddings, restaurants and other venues, stepped outside his home in Alabaster’s Kingwood neighborhood on a sunny day about three weeks ago and decided he’d play a tune on his sax.

Unintentionally, Robbins’ playing caught the ears of neighbors and passersby who happened to be out at the time, and due to the overwhelming response he has kept doing it six days a week, Monday through Saturday, from 6:30-7:30 p.m. from his driveway.

“I didn’t plan on doing it every day, just the one time,” Robbins said. “People reacted, people stopped by and clapped.”

An engineer by day and musician by night, Robbins has played professionally for about 30 years and does mostly solo performances. He traces his love for wind instruments back to the third grade, when he participated in a recorder class.

Later, during his college days at Samford University, he fell in love with the sax while playing in a jazz band. He plays other wind instruments but his primary instrument is the tenor saxophone.

Robbins describes the sound of the tenor sax as a “nice, warm sound.”

“All wind instruments are really expressive,” he said. “It’s almost like singing, and people really connect.

Several people on King James Drive have made it a nightly tradition to let Robbins serenade them. Next-door neighbors sit out on their porches or on blankets. Others drive up and “tailgate” from their vehicles across the street; still others have taken lawn chairs and placed them in Robbins’ driveway. Even police officers have stopped and listened. But he indicated no one is breaking social distancing rules.

Anyone listening can expect to hear a wide range of genres, from the popular “Old Town Road” to smooth jazz to even Nirvana or Led Zeppelin.

“The restaurants I play in are closed; I just play to the birds and to passersby,” Robbins said. “It’s really, really fun to see everybody laugh.”

He said the impromptu “concerts” have brought on a strong feeling of community, and he has gotten to know neighbors he didn’t even know by name before.

Someone posted a performance on Facebook live, and overnight the video was viewed more than 1,700 times. Robbins then started posting clips which would get thousands of likes and comments.

He is hoping that even when quarantine ends, the sense of community will continue.

“I didn’t know this would blossom like it did. I didn’t intend for it to—it’s not about me, it’s about the neighborhood,” Robbins said. “It’s not a performance—it’s very interactive. It’s fellowship.”