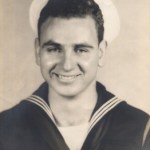 “The American Village is pleased to join the Shelby County Reporter in recognizing Fireman First Class James Grover Shirley as Veteran of the Week,” American Village founder and CEO Tom Walker said. “He is representative of the hundreds of thousands of Alabamians who have risked it all for the sake of our country and its freedom. To all veterans we owe a debt we can never fully repay.”

James Grover Shirley was born on Oct. 29, 1923 in Helena, Alabama. In 1944, at the age of 21, he enlisted in the United States Navy and was shipped to the Great Lakes Naval Training Center for basic training. After his basic training was complete, he served as Fireman First Class aboard the USS Sable, Hull No. 1X-81.

In April 1945, Shirley was transferred to Camp Tadcen, a transient facility located in Shoemaker, California, to await further deployment. He was assigned duty aboard the USS Graylag, Hull No. AM-364. The Graylag was a steel-hulled mine sweeper built in Portland, Oregon.

At the conclusion of World War II, James received an Honorable Discharge and returned to his home in Hope Hull, Alabama, where he lived until his death in 2014.