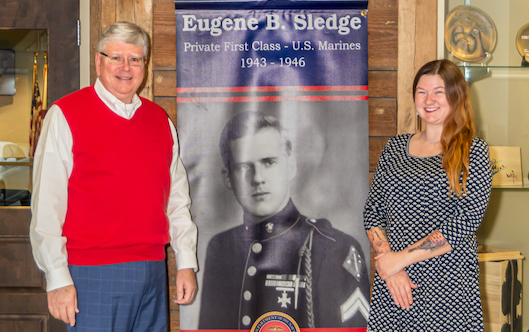 Design Committee Chair Kirk Lightfoot poses with the author in front of a veteran banner honoring Eugene B. Sledge, a well-known local veteran who served in the Marines before a long career at the University of Montevallo. (Photo by Fotowerks Custom Photography)

Around Memorial Day, Independence Day, and Veterans’ Day, visitors to Montevallo can see the faces of 60 veterans—and counting!—who have served our country from World War I to present.

“I thought it would be a great privilege for the City of Montevallo to honor veterans with this banner project, so that we have their faces up so that citizens can see them,” said Kirk Lightfoot, Montevallo Main Street Design Committee Chair and the driving force behind this project. “Someone told me that seeing the banners reminds them of the great men of Montevallo who they didn’t even know had served.”

Lightfoot was inspired by Jasper Main Street, who launched a similar program in 2017.

“I served the veterans for almost 40 years at the VA Hospital in Birmingham and have always thought that we need to recognize them in any way we can. Since my own father is a veteran, I wanted to honor him in some way too, and I thought this would be a nice thing to offer for other families to honor their special veteran,” said Lightfoot.

This has been an all-Montevallo effort. The banner templates were designed by Melanie Poole of American Village. Jack Kish of the Type Shop personalizes the banners, and Dixie Decorations produces them.

A contribution from funds raised by this project was made to support the American Village’s Veterans Living Legacy Fund. American Village’s National Veterans Shrine is a breathtaking facility that also houses the Register of Honor, a database where individuals may submit names, photographs and biographies of veterans free of charge. Learn more at www.veteransregisterofhonor.com.

“Montevallo Historical Society provided us with the oldest veteran, Cliett Hendrick, who served in the U.S. Army from 1917-1918. This is also the most unique photograph as it shows him on horseback on Main Street,” said Lightfoot.

Lightfoot works alongside the City’s Public Works Department to make sure banners are strategically placed when possible to locations appropriate for the veteran, such as near their home or place of employment. For example, two former mayors are placed close to City Hall.

The Veteran Banner project is completely funded by private donations at no additional expense to the city. Banners may be purchased for $300 each to honor a specific veteran with their name, photo, service branch, rank and years of service. Individuals and civic groups are invited to contact Executive Director Courtney Bennett at mainstreet@cityofmontevallo.com to place an order. At the end of the three-year project, the banners will be presented to family members or organizations who purchased them.