It all started back in March during the first weeks of quarantine when just like everyone else, the community of Columbiana was staying at home to be safe, but families and individuals were still safely getting out onto sidewalks and the quiet streets to walk, run and get some fresh air. 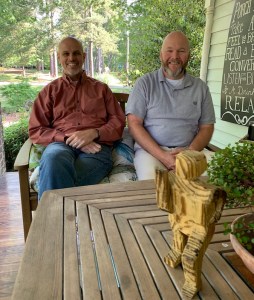 Joel Dixon, HR supervisor at the Shelby County Board of Education, had long been known in the area as an early morning runner. Post-run, like so many runners do, it’s not uncommon for Dixon to share some bit of wisdom or encouragement he gains from his runs on his personal Facebook page.
When people began to shelter at home, Dixon and his family also helped to spark the #sidewalkvibes chalk art phenomenon around town as they took walks together in the evenings and left chalk art in town encouraging others to do the same.

The sidewalk fun really began to take off when Alabama House Representative Corley Ellis, Dixon’s friend and nearby neighbor, left a special message on the sidewalk for his buddy to find and posted it to Facebook.
The message? “I don’t think Joel Dixon really runs. It’s a scam!”

This sparked a community-wide friendly, day-to-day sidewalk chalk roasting of Dixon, who responded to the gentle abuse by taking to the streets with a cowbell to prove his daily run to those who questioned him.

Dixon used some of his spare time to hand carve a wooden figure of his buddy to spark more community bonding.

On May 1, Dixon posted a video introducing the small wooden figure, dubbed “Somewhat Smaller Corley,” and where to find him.

Smaller Corley has a message attached to his back requesting the finder take pictures with him and re-hide him.

The instructions also suggest the finder make a social media post with the hashtag #whereonearthisCorelyEllis along with hints on where to find him next.

When we asked Dixon what his hopes for the #slightlysmallerCorelyEllis were, he said, “It’s fun, positive, and I hope it encourages people to get out and exercise.”
Ellis, on the other hand, who is also pleased with the community fun and involvement in the joke, said, “I’ve often told people that if they see me running, they will probably want to run too because it means something is chasing me.”

To participate, watch the #sidewalkvibes group or the hashtag #whereonearthisCorelyEllis for hints on where to find the carving.

Go searching for him and don’t forget to share!

Local DJ cruises through Columbiana for a cause

By SASHA JOHNS / Community Columnist “Little towns can do big things when we all work together,” Renee Wilder said.... read more