A display of radical kindness

It has been said that tough times don’t build character, they reveal it. During this difficult time, we see countless examples of kindness and compassion.

In thinking about kind gestures, I am daily reminded of those whose kindness is second nature. People who exhibit kindness are part of everyday living. 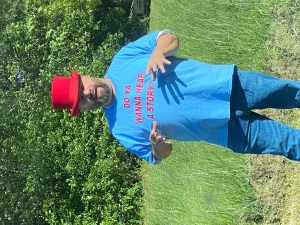 Duck Haywood has appeared in several articles because he and his wife Jody do so much for the community of Harpersville. They have worked in church ministry with young people, he loves to tell the story of the Bible in 30 minutes or less and can blow up balloons and turn them into a multitude of characters bringing smiles to children’s faces.

He of course can not do this alone. I call his wife, Jody, his “wing lady” and she laughs often adding that being in the public eye is not her favorite. Yet, she dutifully engages out of love for both her husband and the Lord. I know Jody through Community Bible Study in Columbiana.

Just before pandemic pandemonium started, I had a life event that I was blessed to have enormous support in getting through. The two of them brought me a gift called a “Box-O-Smiles” that was full of small boxes, individually wrapped. The note on the box said, “You are special to us and so we always want you to have a reason to smile.” Each box contains small reminders of God’s love. One box was full of paper butterflies, each with a tightly wound rubber band so that when opening the box, the butterflies fluttered everywhere. It was so much fun!

Who knew that during this time of isolation I would have a box of smiles to pick up the mood? Obviously, God did. Isn’t is refreshing that there are people who share fruits of the Spirit as part of their everyday routine? I learned that these boxes have been given to several people. What a ministry!

These same two people put in a large portion of time preparing, practicing and arranging logistics for others to enjoy the gift of storytelling that Duck possesses. From “Soup and a Sandwich” to the drive-in Easter sunrise message straight from the pasture it is obvious that Duck Haywood loves to make people smile.

Most recently, to break the monotony of being stuck at home, he dug deep into his childhood and reinvented an old folklore hunting story. The event tagged as “Laughter in the Pasture” was good clean fun and full of laughs as he exaggerated the story of a young boy on a hunting excursion. From bears to wild boar, turkeys and ducks, the boy finally got his rabbit.

Neighbors each in their own vehicles and parked in a crescent moon could listen to the story over the radio in their car. And, because of the way everyone parked people could see each other and wave and most importantly smile at one another.

The evening was a gift. And another display of radical kindness.