Boren creating excitement as Montevallo gets back to work 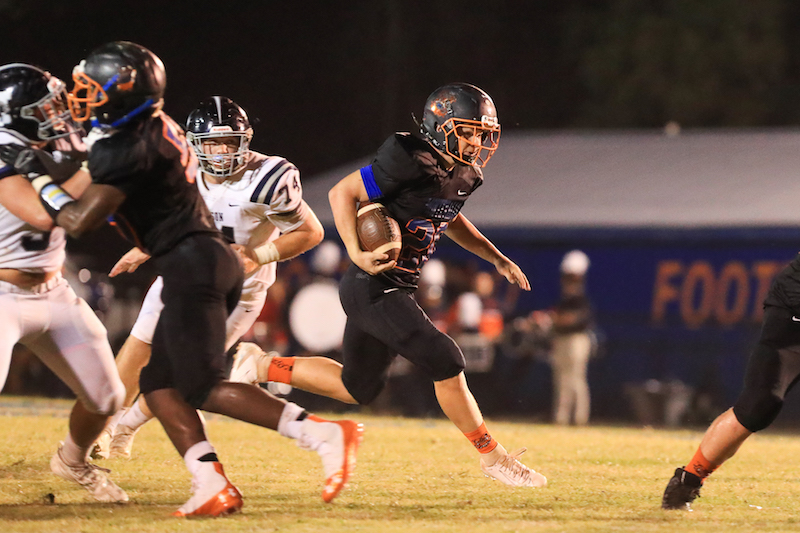 Led by new head coach Blake Boren, Montevallo is finally able to start preparing for the 2020 football season after a long three-month break due to the spread of COVID-19. (File)

MONTEVALLO – A new era in Montevallo High School football also means digging up some of the past as former player Blake Boren gets set to lead the Bulldogs as a head coach almost 20 years after suiting up for the school.

The challenges, however, lie ahead for Boren after taking over his first head coaching job just more than a month before the team was forced apart for three months due to COVID-19.

“Got hired Feb. 3 and we shut down early in March,” Boren said. “We had about 20 days with our kids. That time went by really quick. We didn’t get all the way started, but we did see a lot of positive gains in those days.”

But Boren is an offensive coach and plans to get the best athletes in the school playing for the team to help them overcome the losses.

“We lost some great players, but there were some great athletes walking the halls that weren’t playing,” Boren said. “I tried to be visible in the halls and recruit the hallways.”

Boren said there were 13 kids in the room during the team’s first meeting.

“A school of our size has to be better than that,” he said. “I worked that first month and a half trying to walk the halls and increase the roster size. We’ve got the size of the roster back above 50 now. Last year ended with 29 kids, so to almost double that so far is good. Increasing participation and the roster will be a big deal.”

The Bulldogs will have approximately 10 seniors on this year’s team, but only three of those 10 will have playing experience after losing 13.

One of the biggest positives for Boren when the team returns to the school for summer workouts on June 10 after a three-month hiatus will be an experienced coaching staff that includes his dad and former Montevallo head coach Charlie Boren, who will coach the offensive line.

Charlie Boren was the head coach of the Bulldogs from 1998-2002, coaching Blake as a sophomore and leading MHS to a 28-22 record with a 1-1 record in the postseason.

In addition to that, there is more excitement surrounding the coaching staff as well.

“We’ll have a whole new staff, five or six new assistant coaches,” the head coach said. “Our staff will be phenomenal with guys that have coached at the college level.”

While it’s Boren’s first year as a head coach, he knows that staff and having held coordinator jobs at Hoover and Mountain Brook high schools, while also serving under his dad at several stops including Faulkner University, will help him this season and moving forward.

“This staff has worked together almost all the way back to my Faulkner days,” Boren said. “We are comfortable with each other and feel confident. For me as head coach, to have a staff and my dad, it helps take pressure off me to have their experiences.”

In addition to the camaraderie within the coaching staff, there will also be a new look and excitement surrounding the program once the players return.

Not only will there be new uniforms, but the facility, including the weight room will have a major facelift.

“When they get back, I want it to look completely different,” Boren said. “We have a $30,000 weight room renovation happening. A lot of equipment we had was what I was using when my dad was here. We’ll also have new paint and new floors and we’ll have new uniforms and remodeled helmets. We want it to be a first-time excitement for them. It’s pretty neat to see the change. That’s been the positive of this downtime is getting to see some of those changes.

“When our kids walk in the facility and see what all is going on, they’re going to be blown away with it. We need that excitement.”

Boren said having some former Montevallo coaches on the staff will be a big motivation boost as they try to represent the city and put everything they have into the job.

While the coaches haven’t been around the players in close to three months, many have been doing the necessary workouts at home, and Boren said he had seen several around town that looked to be in great shape, while they got their weight and maxes tracked early on before the pandemic.

Alongside the work to get in shape, Boren said the key for the Bulldogs getting back from such a long break with a new coaching staff is getting in the film room and dissecting tapes so the players can learn the philosophy.

But Boren has a philosophy that he’s comfortable with and one he’s used at most stops that can be molded to the talent on the team. Once the team buys in, he sees success in the future.

“The first thing to buying in is seeing the kids and working with them every day,” Boren said. “I don’t want to beat a kid down. I want to create excitement and make football fun. When they come into work every day, I want them to see positivity, upbeat, music playing. We like to consider ourselves players’ coaches. We want to make it enjoyable for them and for them to trust us.”