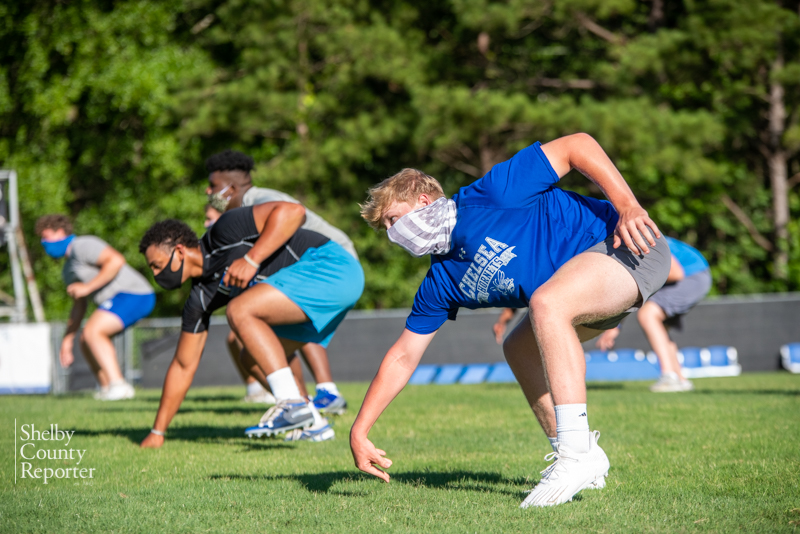 Chelsea took proper precaution of wearing masks during the start back to summer workouts, but two confirmed cases of COVID-19 have found their way to the program. (Reporter photo/Keith McCoy)

CHELSEA – Less than two weeks into summer workouts, the Chelsea Hornets have had to shut down due to positive cases of COVID-19 within the football program.

The Hornets began summer workouts on June 8 in preparation for the upcoming season, but Thursday, June 18, marked the day two confirmed cases of the novel coronavirus forced them off the field and out of the weight room until Monday, June 6, following the Fourth of July holiday.

“As workouts started earlier this month, we have worked diligently to maintain guidelines for safety recommended by state and local authorities. However, we have unfortunately had two members of our CHHS football program to test positive for COVID-19,” Chelsea Principal Brandon Turner said to parents in a release. “Consequently, out of an abundance of caution, we have postponed all football workouts until Monday, July 6th to help ensure that we do not have further infections at this time. Thank you for your patience, understanding, and cooperation as we continue to prioritize the safety of our student-athletes.”

It’s a tough blow for the Hornets, who are also trying to fill the key role of starting quarterback for the upcoming season, while also simply just trying to get players back in shape.

Head coach Dustin Goodwin said during their first week back together that the team had been trying to stay in touch while away, but that it was much better to have everyone back together in person because they were all on the same schedule.

He also said the coaching staff would make sure the kids would do everything possible to try to prevent an outbreak because they want to do everything they can to play a season. Players were wearing facemasks and everything was sanitized during that time span.

The next step, however, once somebody had a positive case was for the Hornets to postpone workouts in the hopes of limiting the spread.

Currently, there are only two known cases on the team and it hasn’t spread further than that after the team shut down operations. One of those cases is from a coach.

If the outbreak is contained to those two current cases, then Chelsea plans to resume practice on Monday, July 6. Due to shutting down immediately upon being notified of the confirmed cases, Chelsea’s 14-day timetable started early, while the team was already set to be off during the week of June 29 anyway.