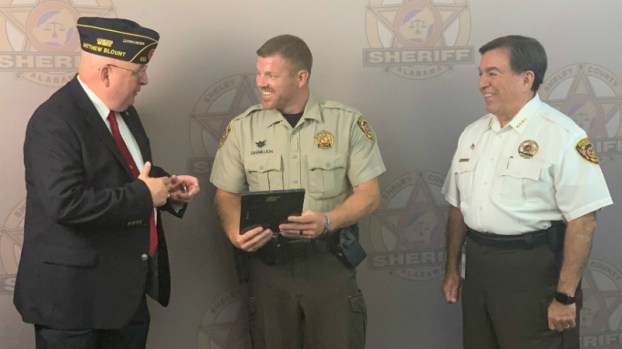 Gremillion honored as Officer of the Year by American Legion post

Gremillion, of Alabaster, has been with the SCSO for about seven years after spending about five years with the Calera Police Department to begin his career in law enforcement.

Gremillion was nominated by Lt. Jason Myrick for his role in a vehicle pursuit on Interstate 65 that stretched from Calera to near the Interstate 459 interchange.

The pursuit ended with three arrests and the recovery of a stolen vehicle and stolen firearms—and no injuries.

“I was able to take the lead in it, and we were able to end it in the safest way possible,” Gremillion said of the multi-agency pursuit that also included the Calera and Hoover police departments.

As a patrol deputy and field training officer, Gremillion’s responsibilities include contact with the communities he serves, searching for wanted subjects and teaching trainees.

“I enjoy having the chance to train another officer,” Gremillion said.

The recipient of the award is usually recognized at a banquet, but the ongoing pandemic forced the cancellation of the event.

Gremillion said he was especially proud of the honor once he learned the history of the award and Post 555, which is named for U.S. Army Reserve Second Lt. Matthew Blount, who served tours of duty in Germany and Iraq and died of a rare form of cancer in 2012.

Blount’s father, Barry Blount, created the post in his son’s honor and serves as its commander.

The Pelham-based post has grown from about 30 members to about 280 in five years, Barry Blount said, and is now the largest in the district.

Blount said the officer honored by Post 555 typically is then honored as the Alabama Officer of the Year, but that award will not be granted this year because of the pandemic.

“We’ve done it every year of our existence,” Blount said about the recognition. “We love being a part of their family.”

By ALEC ETHEREDGE | Managing Editor While the last few months have been filled with uncertainty surrounding the sports world,... read more