ALABASTER – Larry Sailes, a pastor and retired Navy veteran, has announced his intention to run for the Alabaster City Council’s Ward 6 seat. 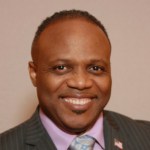 “There are good things happening in Alabaster,” Sailes said. “Of course, there could always be more progress. I think my forward thinking, my ability to manage processes will be a benefit to the City Council.”

Sailes first announced his decision at a march and rally for racial justice at the Alabaster Municipal Complex on Saturday, June 20.

The current City Council member for Ward 6 is Scott Brakefield, who has announced he will seek the office of mayor. Current Mayor Marty Handlon will not seek re-election.

Sailes ran against Handlon in 2016 but fell short of the votes needed for election. Sailes said he decided he would not run against Handlon again, or Brakefield, because he thinks the city is “heading in a pretty good direction.”

“I decided it would be more advantageous for the city for me to run for a City Council seat and continue the forward movement,” Sailes said.

Sailes grew up in Montevallo and graduated from Montevallo High School in 1986. He joined the U.S. Navy after high school and served more than 20 years of active duty, including the Gulf War, the War on Terror and surviving the Sept. 11, 2001, terrorist attack on the Pentagon.

Sailes holds a bachelor’s degree in human resource management, a master’s in health care management and an honorary doctorate in divinity.

Upon his retirement from the Navy in 2006, Sailes and his family located to Alabaster.

He has been married to Theresa Lynn Sailes for 31 years, and the couple has three adult children, all of whom attended Alabaster City Schools: Dante’, Alexis and Urijah.

Sailes has been the pastor at Hopewell Missionary Baptist Church in Clanton for the past 12 years.

Sailes said he thinks Alabaster has the potential to be a beacon of progress for the rest of the state.

He wants to continue the city’s focus on families by continuing to ensure excellence in the Alabaster City School system and finding new ways to provide entertainment, especially for youth, and addressing the opioid epidemic.

“Families are the key to the future of Alabaster,” Sailes said. “I look forward to the opportunity to serve Alabaster and the constituents of Ward 6 and city-wide. As the theme right now is unity, I want to be a part of that and emphasize the good things happening in Alabaster.”

ALABASTER – Tired of her father’s job interrupting family time, Margaret Connolly once tossed his hospital beeper—this was before the... read more