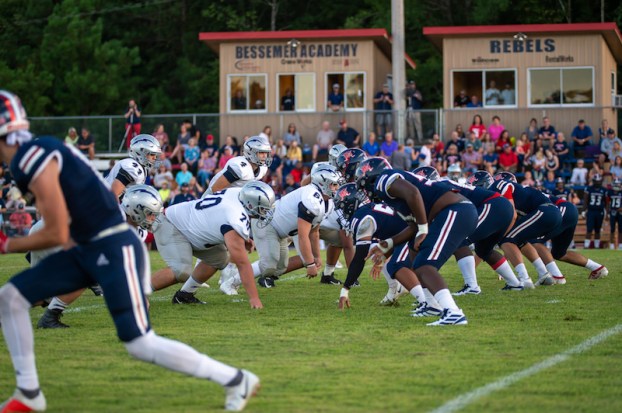 The Evangel Lightning will play one of the most difficult eight-man football schedules in the country this season, which will include a rematch of last year’s national championship game the Lightning won in overtime. (File)

ALABASTER – Coming off yet another ACSC State Championship and a second consecutive NHSA National Championship, the Evangel Lightning will enter the 2020 football season looking to continue their dynasty.

Heading into the upcoming season under fourth-year head coach Tim Smith, the Lightning will have some key positions to replace and also have some key returning players, but the schedule also provides its share of excitement and another challenge for the team.

Not only will the eight-man team compete against both 11-man and eight-man competition, but the Lightning will also play four teams from out of state in addition to five in-state opponents.

They’ll look to have another impressive season this year, and they’ll have a great chance to start off strong with two of their first three games against opponents they fared well against last year.

It will start on Friday, Aug. 21, with a road matchup against Meadowview Christian. Meadowview finished last year 0-10 and failed to score points in six of those 10 games, while Evangel picked up a 46-6 victory against the Trojans.

It also marks a quick test for the Lightning from the standpoint of number of players on the field, as it will pit Evangel against an 11-man team right off the bat. Last year, that proved not to be a problem.

That will lead into a matchup against East Central HomeSchool a week later. Last year, the Patriots played just three games and went 0-3 in eight-man play, while the two teams last met in 2008 with Evangel winning 50-0.

Following that will be the first of three straight road games and the first of two out-of-state games in a row as Evangel travels to Antioch, Tennessee to take on Ezell-Harding in what should be one of the more thrilling games of the season.

Last year, the Lightning hosted the Eagles and won 82-55 during the regular season. Then, during the national championship game, the two found themselves in a rematch that saw Evangel squeeze out a 92-90 overtime victory.

Those two losses marked Ezell-Harding’s only two losses of the season, finishing the 2019 season with an 11-2 record.

Following that difficult road contest, Evangel will head to a new state a week later when the Lightning travel to Woodstock, Georgia to take on King’s Academy on Friday, Sept. 18.

Another strong program, King’s Academy finished last year 7-3 and advanced to the third round of the playoffs.

A week later on Sept. 25, Evangel will return to the state, but remain on the road for the third consecutive week when the Lightning travel to take on Lighthouse HomeSchool.

Last year, Evangel was able to claim a 58-20 victory over Lighthouse and has won all six matchups between the two in the last six years.

The Lightning will then return back home for three consecutive weeks starting on Oct. 2 with a matchup against rival Ezekiel Academy, who finished last year 8-3 overall, but lost to Evangel 80-35 in the regular season and 38-16 in the ACSC State Championship game.

Evangel holds an all-time record of 12-0 against its rival.

Following that, the Lightning will welcome in another out-of-state opponent from Nashville when the Tennessee Heat pay a visit to Evangel on Oct. 9.

The Lightning will then host a familiar on Oct. 16 when the Freedom Cowboys come to town. Evangel beat Freedom Academy 70-14 last year and is 6-9 against them all time with five of those wins coming in the last five years.

Evangel will then hit the road for one last out-of-state matchup to close out the regular season on Oct. 23 when the Lightning travel to Sugar Hill, Georgia to take on Georgia Force Christian. The Blue Knights went 5-5 last year.

That will lead into another chance at the ACSC State championship, as the Lightning attempt to not only defend that title, but also chase down another national title.