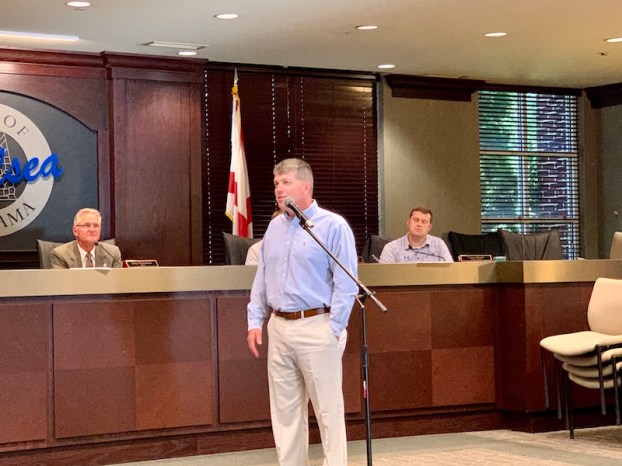 Shelby County Sheriff’s Office Capt. Clay Hammac, executive director of Compact, formerly known as Compact 2020, gave a recap of the initiative and what has been accomplished since its launch four years ago.

Compact’s purpose is to identify students who are at-risk for drug addiction and to provide community-based evidence and resources to help these students and their families, Hammac said.

Compact’s Prevention Initiative is implemented across the county through collaborative community coalitions, with volunteer prevention teams tasked with creating and maintaining change in each city.

“We have successfully identified over 650 students classified as at-risk, and we have been able to meet with those families, to let parents know what we know,” Hammac said. “Not for the purpose of enforcement action; our point is to save lives.”

Hammac said Chelsea’s Compact investigator has assisted in identifying at least 40 Chelsea-specific at-risk students and meeting with their families.

In addition, Compact presentations have reached more than 3,500 students.

“It is a new frontier,” Hammac said. “We’re forging a path in law enforcement that really doesn’t exist anywhere else.”

Shelby County Sheriff John Samaniego thanked the council for Chelsea’s support of Compact and announced his plan to place another SCSO deputy at Chelsea Middle School as an additional student resource officer for the 2020-2021 school year.

Samaniego said he was concerned about the school of its size having only one SRO.

“We are excited about that,” Mayor Tony Picklesimer said. “It’s a big facility. The (sheriff’s) department has allocated another person for that responsibility, and they did so within the perimeters of our existing contract. We are grateful to them for the support.”

“As our community continues to grow, we have to grow along with it,” Shirley said. “We’ve been planning for quite some time to grow our administrative staff.”

Lee has more than 25 years of fire service experience and has served in Chelsea for the past five years.

Shirley said Lee displays a deep commitment to Chelsea, where he grew up and is raising his family.

“I’m very thankful for this opportunity,” Lee said. “I’ll do my best to work with Chief Shirley.”

A formal badge pinning ceremony for Lee will be held at a later date.

Also at the July 7 meeting, the council:

By ROBYN JAMES | Special to the Reporter ALABASTER – The famous quote that parks and playgrounds are the soul... read more