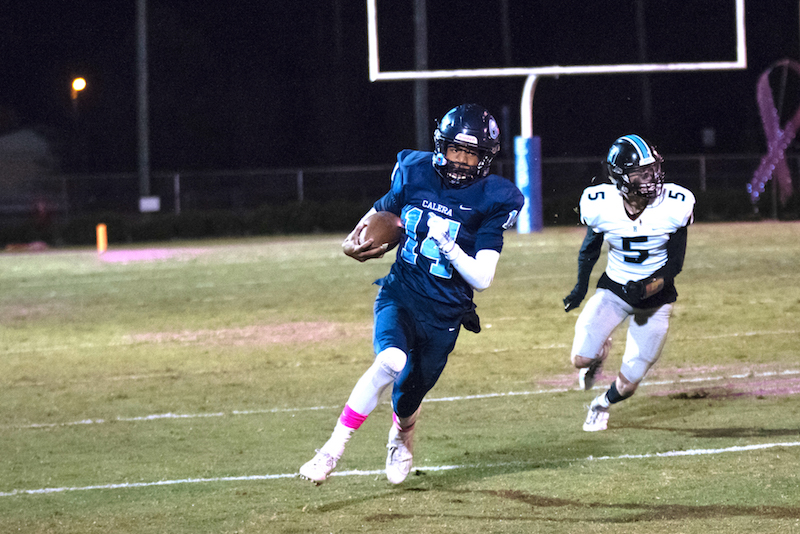 Calera’s 2020 football team will feature a lot of young talent, but it could also be the group that helps the Eagles take the next step in competing at the 6A level. (File)

CALERA – The leap into Class 6A has proved difficult for the Calera Eagles with one win in each of their first two seasons in the classification.

Last year became even more difficult with a coaching change in July, just more than a month before the season started. The Eagles haven’t been able to find any consistency or depth the last two years, but now, it looks like the ship may be headed in the right direction.

The Eagles have now had a full year under Trey Simpson as the head coach, and are in their first full offseason with him at the helm. Not only that, but the numbers in the program are finally starting to reflect a 6A program and one of the fastest growing cities in the state.

Last season, between injuries and lack of players, the Eagles ended the year with 52 players on the roster largely due to 13 season-ending injuries.

But heading into the 2020 season, the coaching staff is expecting between 80 and 90 players to come out for the team.

The only problem right now is that those players are young with 35-40 being freshmen and 25-30 being sophomores. But, the good news is several of those sophomores got playing time as freshmen last year after being thrown into the fire due to the lack of depth with numerous injuries.

Simpson is excited, and while the team may be a year or two away from a deep playoff run, he feels this year’s group will surprise a lot of people if the players he thinks are capable of a breakout year pan out.

One of those players will be starting quarterback Tyler Nelson. One of those youngsters, Nelson started most of the season last year as a freshman.

Now a sophomore, he’s 6-foot-2, 180 pounds and primed for a breakout season. He’s a player that isn’t scared of taking on the position and competing against the best, not batting an eye when he was thrown in for his first start against powerhouse Opelika last year.

Heading into his sophomore season, Nelson knows the position and has had time to not only work on his mistakes, but work with the same coaching staff for an entire offseason. He has the intangibles to be great, and if he does have a breakout sophomore season, he’ll become a sought after recruit with two years left at Calera.

One of the few seniors on the team this year will be at the running back position with Chris Cotton set to take on the starting role. He broke his arm during week three last year, but now he’s healthy and has worked hard to put on more muscle to handle the duties of being an every-down back.

Receiver may be the biggest concern on offense this year, which will determine how successful Nelson is at quarterback. There are three players the coaching staff will count on, starting with returnee Kobe Prentice, who can help all over the offense due to his speed.

Prentice will be the top target, while Jaydien Rutledge and Javante Nelson are expected to play big roles this season. Beyond that, however, the Eagles are still searching for more threats and depth in the receiving corps.

Up front, the Eagles won’t have any seniors, but will return several players that got experience last year and hope to rotate 15 players at the position throughout the season to help with health and depth.

The four leaders will be juniors Matthew Tucker and Trey Bright and sophomores Mason Colmer and Brody Odom. Tucker and Bright will handle tackle positions, while Colber and Odom, who started three games last year, will handle guard positions.

Tanner Greene and Landon Marton are battling for the fifth spot, while close to 10 more are working to add depth at what should be an improved position this year.

Moving over to the defensive line, however, is where one of the team’s biggest concerns will come.

It’s possibly the position Calera loses the most at this year largely due to the departure of Jayson Jones, now at Oregon. Losing him is like losing two players due to the number of double teams it took to block him on each play and what he did to tire out opposing offensive lines.

The coaching staff still expects the line to be able to make an impact this season, largely because of the return of four-year starter and team leader Will Sims. He will solely play on defense this year and is what drives that side of the ball.

Joining him will be Braxton Taylor, Rodriguez Smith and Jalen Pearson, while Trip Gallahan, Jamichael Vines and Fred Hurth will all be in the rotation. There is some inexperience in the group as a whole, but also a level of excitement about the potential there if those players can play on one side of the ball and stay fresh.

Behind them in the front seven will be a young group of linebackers, but a group that brings back a certain level of experience and plenty of athleticism.

There are six players battling at the position with sophomores Keven Holman and C.J. Richardson playing key roles in addition to senior Cameron Medders. Holman started two games last year, while Richardson and Medders are expected to make big plays.

But the strongest unit on the defense, and possibly on the team, will be the secondary.

Returning this season will be seniors Jeremiah Jones and Derrick Edwards, who are two of the team’s most experienced players as three-year starters.

They will lock down cornerback and are two of seven players the coaching staff is confident in making plays in the secondary. Senior Art Amos will return at safety, while sophomores Michael Banks and Zymeer Jemison also return with experience.

On special teams, Jordan helm is returning to handle all kicking duties, and he should be more consistent this year in helping make a difference in closer games.

Prediction (4-6): Don’t let the prediction fool you, Calera is on the rise and could surprise a lot of people this year, but the Eagles are just extremely young. Coming off back-to-back one-win seasons, picking up an additional three wins will be a remarkable feat with the level of youth on the team. With approximately 70 of 90 players being underclassmen, they’re going to have to grow up fast with a difficult schedule, but the athleticism and talent is there for this team to be close to a .500 team depending on how good other teams are. If players like Tyler Nelson at quarterback can flourish as sophomores, this team won’t just be a surprise, they’ll become a legitimate threat the next three seasons.