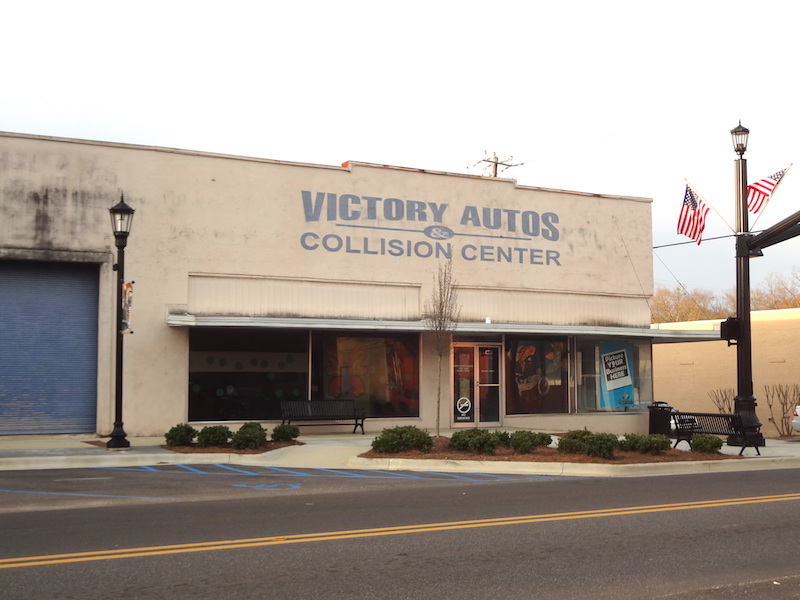 The renovation and occupancy of the old Victory Autos & Collision Center building at the corner of Main and Shelby streets in Montevallo are included in a capital improvement project, for which the City Council approved a concept proposal Aug. 10. (File)

On Monday, Aug. 10, the Montevallo City Council voted unanimously to approve a concept proposal outlining the project, which calls for upgrades at Dailey Park to make it the city’s first fully accessible park; the renovation and occupancy of the old Victory Autos & Collision Center building the city owns; the installation of a storm shelter on property behind City Hall; and securing a contract to develop a hotel behind the Victory building.

Mayor Hollie Cost said the council has discussed the preceding items over the years, and they are included in the city’s new comprehensive plan adopted in July.

“I feel as this council, we have an obligation to finish what we’ve started, and we have some great opportunities right now to do just that,” Cost said. “We have some resources that we’re anticipating getting, and then we also have some improvements that are critical to the city.”

The plans for upgrades at Dailey Park include the addition of a restroom, ADA accessible playground equipment, a walking track and parking places.

Plans for the Victory building, which the city purchased for $375,000 in 2019, include a brewery occupying the entire top level, and the bottom level being used for ValloCycle, the city’s bike sharing program, and city storage.

“It’s a fantastic space, but right now, it is one of the biggest eyesores on Main Street, and if the city owns it, we are obligated to improve it,” Cost said, adding Montevallo has received a letter of intent from the owners of Interstellar Ginger Beer and Exploration Co. in Alabaster. “This is something that we’ve all agreed would be a nice fit for the city, and it’s something that’s clearly in our comprehensive plan.”

The estimated expense for full site development of the Victory property is $2 million and includes a storm shelter, paving, roof, windows and electrical components.

The estimated gain from sales tax revenue and rent from tenants is $33,750 annually, with the benefit of reinvestment in a historical asset.

“As much as we love Interstellar, and we’re happy they want to be here, it’s in our best interest to invest in this building regardless of the tenant,” Cost said. “We’re just very fortunate that we have a tenant that’s the caliber of Interstellar that’s interested in Montevallo.”

An architectural drawing features the storm shelter on the property behind City Hall, and its estimated cost of $200,000 is included in the $2 million Victory renovation estimate.

The shelter would hold 114 people.

The proposed four-level hotel development would be located near the Victory building and would have 55 rooms.

“We know that we can maintain that occupancy rate because we have done extensive feasibility studies on it,” Cost said. “We have an interested developer, and we have a really unique site plan.”

Property ownership would transfer to the developer.

The estimated economic impact of the hotel is $154,256 in sales tax annually based on 55 rooms at 70 percent annual occupancy at $222 per night.

Regarding funding structure, it is recommended the city take the following actions:

Another project that remains is the sidewalk enhancement and expansion, an estimated $250,000 project that can move forward once an anticipated property sale is finalized.