A look ahead to a busy week 2 of region play 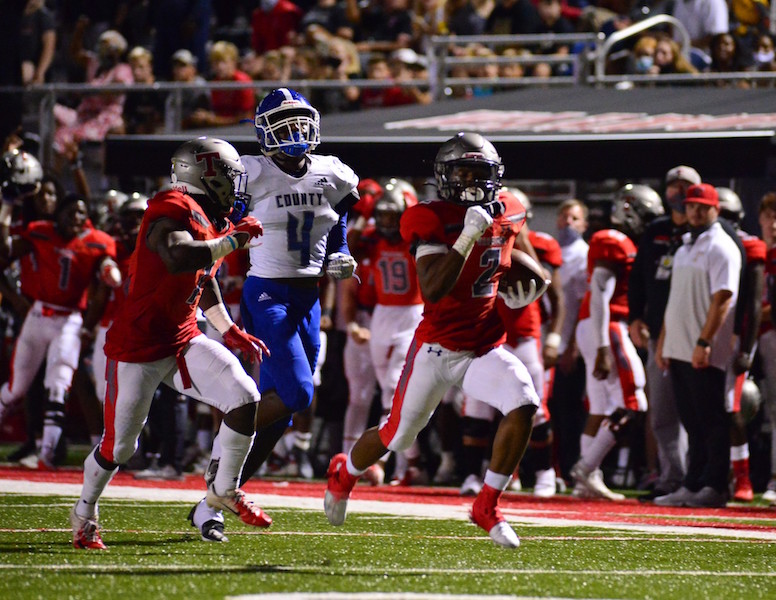 Thompson will host Spain Park in this week's Game of the Week, which is part of an action-packed second week of region play with several big storylines. (For the Reporter/Jeremy Raines)

Now that one week of region play is in the books, the thick of the 2020 high school football season is here and it only gets more challenging from here.

With playoff hopes living and dying each week from here on out, teams are looking to improve to 2-0 in region play or avoid a 0-2 start during one of the busiest weeks of the season with 11 matchups taking place

Spain Park vs. Thompson (Game of the Week)

This game lost a bit of luster after Spain Park fell to No. 2 Hewitt-Trussville 45-13 last week. Now the Jags get county foe and No. 1 Thompson to cap off a difficult two-week stretch. The Warriors on the other hand are coming into this matchup as confident as they can. Thompson beat defending 6A state champ Oxford 56-34 in the opener despite a poor defensive performance and have won the last two weeks 39-7 and 49-7. The offense has so many weapons at every position, it’s almost unfair, while the defense continues to improve and play like the dominant unit we expected. Averaging 48 points per game through the first three will cause problems for a Spain Park defense off a performance where they gave up 45 to the No. 2 Huskies. The Jaguars’ offense has shown promise at times this year and definitely has the talent to compete. That side of the ball will have to be what keeps the Jags in this game, but they’ll have to be much more consistent and take care of the ball against some of the country’s best defenders, which may be a tall task.  Spain Park 17, Thompson 42

Off to a 3-0 start, the Oak Mountain Eagles are one win away from their first 4-0 start in school history and it comes in a big game against Vestavia Hills. With Hoover and Spain Park in consecutive games after this one and Thompson and Hewitt-Trussville to close out region play later in the season, the Eagles can ill afford to lose any games they can compete in if they want to make the playoffs. The Rebels will only have one game of the experience going into this matchup. After forfeiting their first two, they lost their first head-to-head matchup with No. 3 Hoover in a tight 24-21 game. The Eagles, however, have the confidence of three straight wins with the defense giving up 15.3 points per game and the offense scoring 34.7 per game. Vestavia won last year’s game 31-10 and is 3-13 all-time, but I feel like this year’s will be a one-score game and will lean Oak Mountain because of the 16 experienced players motivated to make history. Oak Mountain 28, Vestavia Hills 24

Chelsea bounced back from an opening 38-2 loss to Oak Mountain with a solid effort in a 27-23 win against Helena. That performance shows the Hornets can be successful this year, but they may still be too one dimensional on offense. There will be a much better feel for this game after Chelsea’s matchup with Briarwood and Homewood’s matchup with McAdory, but press deadline didn’t allow us to see the outcome of that game. I lean Homewood going into the matchups imply because Chelsea needs to show its offense can consistently make plays to win. This game, however, could go either way and neither team winning would surprise me in the least. Chelsea 20, Homewood 21

Stanhope Elmore enters this matchup with plenty of confidence as the favorite to win the region this year. The Mustangs are 2-1 so far with a forfeit win, 16-10 loss to 7A Prattville and 41-9 win against Benjamin Russell. That could make this the biggest hurdle for Pelham this season. But the Panthers also have confidence after a 2-1 start with a 49-41 win against Calera last week, a 28-21 win against Mortimer Jordan to open the season and a 28-21 loss to 7A Oak Mountain two weeks ago. The offense, which has gotten a big boost from Dylan Peterson the last two weeks, is playing great football and that will have to continue in this one with the added threat of the pass. If the Panthers can compete with the mustangs and possibly pull off a win, then they instantly become one of the contenders in the region for not just a playoff spot but maybe a top-two finish or championship. If Pelham can control the ground game with its solid running backs and give up 21 or less points, they’ll be in good shape, but the passing game is also going to have to come together to beat one of the best teams in the region. Pelham 28, Stanhope Elmore 35

Kicking off a stretch where the Huskies could win four region games in a row and possibly five overall in a row, this obviously marks an important week for Helena. Coming off a second straight loss by six points or less because of inconsistency, the Huskies now get a struggling 0-3 Benjamin Russell team. The Wildcats are scoring 18.3 points per game and giving up 40.7 points per game, which isn’t a winning recipe. Helena has been so close the last two weeks looking like the better team in the second half, but struggling out of the gate. If Helena does what it does best for three quarters—run the football and play physical defense—then the Huskies should win this game. Following last year’s success, this is a week to get the train back on the right track and I think they know that. You’re reaching the point of the season where some of the young, inexperienced players now have experience, while the leaders are hungry to finish off their careers on a strong note. Helena 28, Benjamin Russell 20

Calera’s 1-2 record doesn’t show the effort that has been put in by this year’s team—one that has been impressive in its losses and continues to get better each week. The Eagles have played three head-to-head games, two of which have counted toward their record, and got a forfeit win against Jackson-Olin. The Eagles opened the season against Demopolis, a very good 5A team, and played them as close as they ever have in a 14-12 loss. Then, a week later, Calera got the pleasure of playing the No. 1 team in 6A, the Mountain Brook Spartans. After preparing to play Jackson-Olin, the Eagles found out the morning of the game they wouldn’t play the Mustangs and scheduled a matchup with the No. 1 Spartans. Despite the last-minute shuffle, the Eagles lost just 31-14 after falling behind 31-0, a more than spirited effort. Then, last week, the Eagles almost pulled off a comeback in a 49-41 loss to Pelham. That’s the game that could be the ultimate catapult. Quarterback Tyler Nelson totaled 300-plus yards and five touchdowns, Kobe Prentice had more than 100 yards receiving and Chris Cotton handled the running game. Now, Calera gets a Chilton County team that is 1-1 on the season. While Calera is still a young team, they have several players gaining a lot of confidence and playing in their second year. With a bye week and three home games in a row after this week, it’s an important matchup for the Eagles and one they could easily win if  they play offensively like they did in the second half last week. We’ll see what they prove on the field and if they can change the tone for the season. Calera 28, Chilton County 31

Briarwood’s schedule will become one of the most difficult in Class 6A following this matchup, but the Lions should be able to take care of business against Woodlawn. The Colonels are off to a 0-3 start, losing their first three games by a combined score of 155-19. Briarwood will be another difficult matchup for them, as the Lions bring one of the state’s best defenses to the table, giin gup just 14.7 points per game. With that and their physical presence on offense as well, the Lions should pull away. Briarwood 42, Woodlawn 7

Coming off their first shutout since 2009, the Shelby County Wildcats will now look to start the season 3-0 for the first time since 2008 when they finished 11-1. Selma is coming off a 42-26 win against Marbury after losing their opener via forfeit and their second game to 3A Southside Selma. Shelby County on the other hand has a ton of experience back and is expecting a good season now sitting a 2-0. Most impressive is that the Wildcats’ defense is what’s making the difference early in the season. With an offense that can eat up clock with a strong run game, the defense being improved is a huge bonus. Shelby County 35, Selma 20

After losing to No. 1 American Christian 63-31 last week, Montevallo now gets No. 2 Bibb County in a tough stretch to start region play. The Choctaws, who have been one of the best in Class 5A the last several years, are now a contender to win a title in 4A this season after a quick 3-0 start. They will present a difficult matchup for a young Bulldogs’ team, especially with the defense the Choctaws bring to the table. But it marks another chance for Montevallo to get better against one of the state’s best teams, which will be a major plus moving forward. After this game, the Bulldogs will have chances to compete against the rest of the schedule and possibly win the rest of their region games. Montevallo 20, Bibb County 42

Vincent is finally set to kick off the season this Friday against Horseshoe Bend after forfeiting the first three games of the season due to COVID-19, including last week’s region opener against Ranburne. And despite not playing a game this year, the Yellow Jackets will have a chance to pick up a win against a Generals’ team that is 1-2 on the season scoring 13.3 points per game. But, Horseshoe Bend is playing great defense and hasn’t given up more than 15 points in a game this season. The schedule is going to get difficult after this and already sitting at 0-3 overall and 0-1 in region play, this is an important and winnable game. But with no experience in a game this year, it may be a lot to ask for the Jackets to win this one. Vincent 13, Horseshoe Bend 20

Crenshaw remains a tough out for any team in the AISA and holds an 8-0 record against Cornerstone all-time. It will be tough for the Chargers to find a win this week with their early-season struggles on offense as they were shutout 49-0 and 44-0 in two matchups against Crenshaw last year and have scored a combined 18 points through three games this year while giving up 116. Cornerstone 13, Crenshaw 35

Coming off a bye week and a dominant start to the season, Evangel will now travel to Southern Christian this Friday looking to improve to 3-0. The Lightning have given up just six points in each of their first two games, which is what makes them so dangerous this season because the offense is capable of 40 or more in every game. I expect that combination on both sides to continue. Evangel 44, Southern Christian 13