Grice gets joy, contentment from serving others 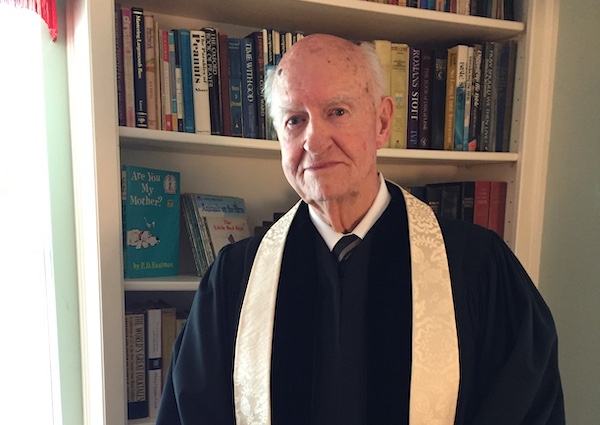 Eighty-year-old Peter Grice was born in Dale County in Ozark, Alabama and grew up in Moultrie, Georgia. Having served a total of 43 years pastoring and held 10 different pastoral appointments, Peter looks back on his tenure with joy and contentment. He cherishes his time working with people and being able to minister to their needs. Even the most challenging part of his role as pastor which was counseling those who were working through sickness, was rewarding. A member of Columbiana United Methodist Church (CUMC) for the past 21 years, Peter served as pastor from 1991 until his retirement in 1997. Since retiring Peter has preached several places as a pastoral substitute.

After dating for two years, he married his wife, Agnes; that was 60 years ago. Their lives intersected when he was pastoring Liberty Hill Methodist Church where she attended. “We learned to tolerate each other very well,” insists Peter. “She is really good at letting me have her way,” he chuckled. Peter graduated Birmingham Southern College in 1958 and then Emery University earning his degree in theology. The couple have three children and nine grandchildren.

Peter volunteered with Meals on Wheels for 12 years. After being diagnosed with lymphoma, he was forced to become inactive in 2015. Grice enjoyed the opportunity to get to meet people and made acquaintance with the meal recipients. “It made us feel like we were helping, even if in a small way,” Peter said. Meals on Wheels (MOW) is a nationwide network of community-based, non-profit programs dedicated to providing seniors in their communities with the support that enables them to remain living in their own homes, where they want to be. This support is typically a nutritious meal, and friendly visit and quick safety check. People over the age of 85 represent the fastest growing segment of the American population. The reality is that 9 million seniors struggle with hunger, 15 million live in isolation, and 18 million live in or near poverty [Source: Mealsonwheelsamerica.org].

Peter serves his community through his CUMC which collects money throughout the year to purchase Christmas gifts for children in need in the community, food pantry, clothes closet for the homeless to its work release ministry which provides one-on-one contact with individuals as well as several meals during the month. Grice also assist with the church’s senior group luncheon. With the help of his wife, Agnes, and another couple, he sets up for the luncheon and helps with cleanup afterwards.