Difficult two-game stretch ends for Montevallo with loss to No. 2 Bibb County 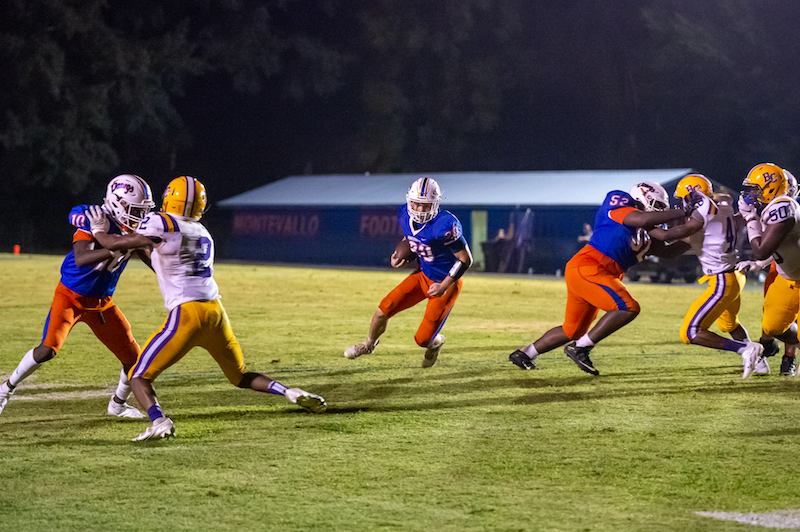 MONTEVALLO – A two-game stretch of taking on the top two teams not only in their region but the 4A classification for the Montevallo Bulldogs ended on Friday night, Sept. 11, with a 37-7 loss to Bibb County.

The Bulldogs, who were coming off a 63-31 loss to No. 1 American Christian, were treated to a matchup with the No. 2 Choctaws a week later, and while they held their own in the first half for the second week in a row, the visitors eventually became too much.

Early in the game, Bibb County took the first lead of the night at 6-0 thanks to a 43-yard touchdown run. After a failed 2-point conversion attempt, the Choctaws had a 6-0 lead.

After going backwards on its first drive due to penalties and mistakes, Montevallo punted from its own 6-yard line on the ensuing drive, which led to good field position for Bibb County.

The Choctaws capitalized with a quick drive, which was capped off with a 4-yard touchdown run for a 12-0 lead.

After that stretch of domination early from Bibb County, Montevallo seemed to wake up over the next few series.

Bibb County was about to score again shortly after, but the Bulldogs came up with a big defensive stop, which led to some confidence for the offense.

Montevallo was able to cross midfield for the first time, which led to a 4-yard touchdown pass from Jay Dreyer to Dakotah Ross.

Bibb County answered quickly with a 29-yard touchdown run on the next drive, but again missed the extra point, leading to an 18-7 game at the half.

After a couple of defensive stands early in the second half from each team, Bibb County had the breakout play with 7:23 left in the third quarter. That’s when the Choctaws scored on a 67-yard touchdown run on third-and-25.

That seemed to be the final straw holding Montevallo together, as the Choctaws added another long touchdown on a 56-yard run shortly after.

That created enough situation, while the Choctaws also scored one more touchdown in the fourth to create the 37-7 final.