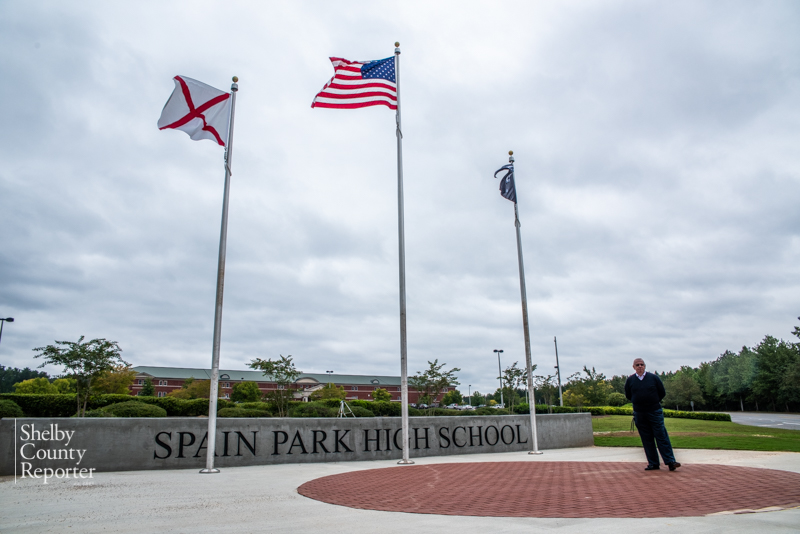 HOOVER – Visitors to Spain Park High School likely will notice a new sign in front of the school, but it’s only one part of an area created to honor veterans with ties to the school.

Brick pavers bearing the names, branches and class years of SPHS alumni who have served or are actively serving in the military will be placed in front of the sign and three flagpoles holding the American flag, Alabama state flag and Spain Park flag.

“This is what we call the three-flag patriotic memorial,” said M.O. “Buzz” Williams, a U.S. Navy veteran, teacher and sponsor of the Armed Forces Club at SPHS. “We love our troops and the sacrifices they have made.”

Williams has managed the project behind the scenes, but he gave much credit to others who have been involved with it, including SPHS Principal Larry Giangrosso and social studies teacher Joe Carter, two of the project’s visionaries; supporters who have contributed monetary and material donations; and those who have constructed the site.

Families will be notified in the coming weeks via social media and the school’s website about when they may start to order engraved bricks.

Once orders open, completed forms and payments for bricks may be sent to the school anytime during the school year.

Each engraved brick will cost about $50, and families may order one brick per student.

“We plan to place these brick orders with the manufacturer by Sept. 1 of each school year beginning in 2021,” he said, adding the first set of engraved bricks will be installed in November 2021.

A dedication ceremony for the site will be held in November 2020.