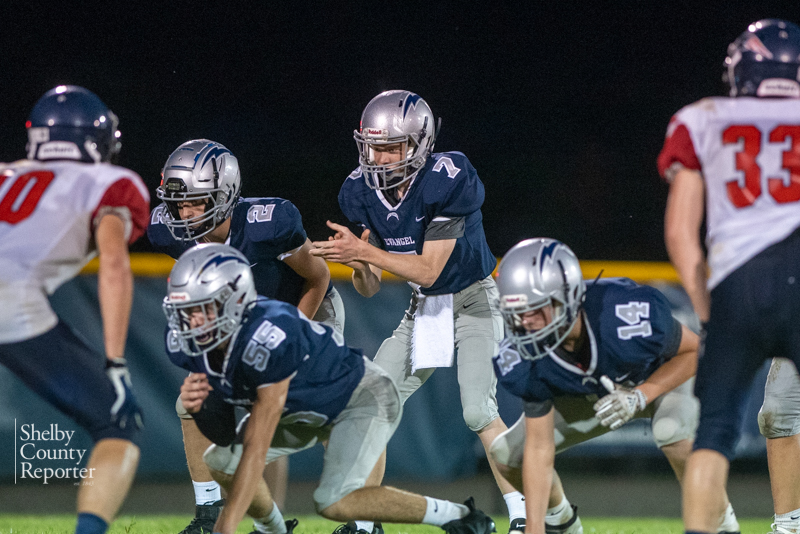 Evangel remains undefeated on the season after a 43-20 victory against the Freedom Cowboys on Friday, Sept. 18, thanks to a strong 22-point third quarter. (File)

ALABASTER – A 22-point third quarter gave Evangel Christian School some distance Friday night, as the Lightning moved to 4-0 with a 43-20 win over the Freedom Cowboys.

The game was a late addition on Monday for Evangel, which was scheduled to travel to North River in Tuscaloosa before the game was canceled due to COVID-19.

“With COVID and everything that’s going on, for us to pick up a game and play at home was good. They were so thankful after it was over that we asked them to play,” ECS Head Coach Tim Smith said. “A lot of us are thankful to be able to play every Friday. We have to play like it’s the last Friday, because we’re not promised the next one.”

Jett Lodge scored his first of three touchdowns to put ECS on the board with an 11-yard touchdown catch from Eli Whitfield. Lucas Mast converted the extra point for the 7-0 lead. The Lightning defense held Freedom on a goal-line stand, but turned the ball over on the 1, setting up a Cowboy’s touchdown and two-point conversion.

Trailing for the first time this season, 8-7, Evangel responded and took a 14-8 lead in the second quarter on another Whitfield to Lodge connection from 16 yards out and Mast PAT. However, Freedom returned the kickoff for a touchdown, to tie the game at halftime, 14-14.

“The best thing about tonight is we got hit in the mouth, and I needed to see it,” Smith said. “I told them we’re going to find out what kind of team we are. We were either going to fight back like we have ever since I’ve been here or go toe-to-toe all game.”

ECS scored on offense, defense and special teams in the third quarter to break the game open. Lodge caught an 18-yard touchdown pass. After the defense pinned the Cowboys deep, Lodge tackled the punter in the end zone for a safety and 22-14 lead.

Whitfield later found a hole and broke for a 24-yard touchdown run, followed by a 35-yard scoop and score on defense by Dylan Weathers and 2-point conversion to stretch the lead, 36-14.

Freedom tacked on a late touchdown in the third quarter, but failed to convert its two-point try.

Whitfield accounted for his fifth touchdown of the night late in the fourth quarter, on an 18-yard connection with Bradley Davis. Mast tacked on the extra point to round out the scoring. The Lightning had another late drive, but took a knee to end the game.

ECS’s sophomore quarterback finished with 172 yards on 12-of-27 passing and added 66 yards by foot on eight carries. Lodge (seven catches, 61 yards, three TDs) and Davis (three catches, 74 yards) were the go-to targets all night. Offensive tackle Caleb Lumpkin also got in on the action with a 39-yard reception in the second half.

“Eli’s is growing up. He had never been rattled, but they hit him tonight, and he responded,” Smith said.

Defensively, Lodge led ECS with 15 tackles and two sacks, Timothy Howard recorded 15 stops and a sack, and Weathers added 10 tackles. Chris Lee and Connor Nettles each had an interception in the win.

Evangel (4-0) opens its eight-man conference schedule Sept. 25 when it travels to Oneonta to meet unbeaten Lighthouse Home School. It’s the first of three potential unbeaten opponents over the next three weeks.

“I’m excited about it. Our kids want to play the best competitor and we’re going to see it,” Smith said.