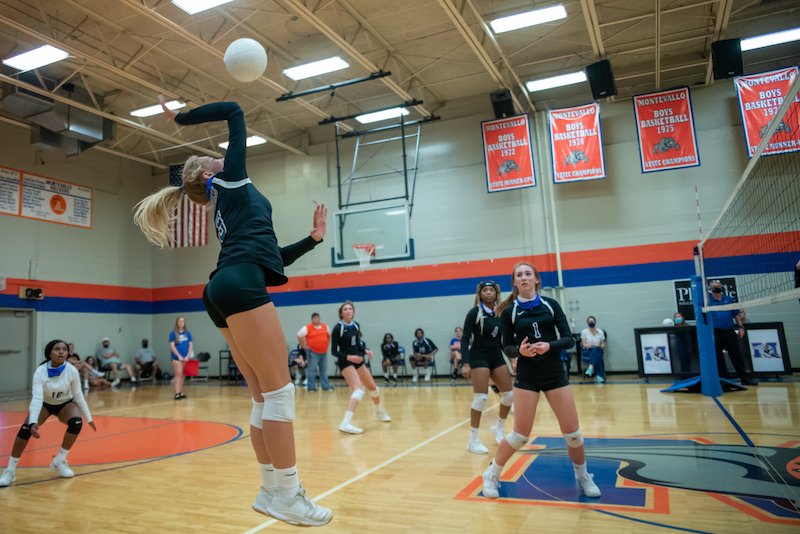 The Montevallo Bulldogs have hit a hot streak in area play after beating Dallas County on Tuesday, Sept. 22. (File)

MONTEVALLO – The Montevallo Bulldogs continued an impressive season on Tuesday, Sept. 22, picking up their fourth win in a row to improve to 9-8 on the season.

In dominant fashion, the Bulldogs took down Dallas County in an area battle in straight sets, winning each set by at least 13 points to pull away from the Hornets.

With the current four-match win streak, Montevallo has rebounded from a difficult stretch where the Bulldogs lost seven of nine matches. That improvement has helped their confidence moving into the final leg of area play and the area tournament in October.

In the opening set of the match, Montevallo came out and set the tone early by creating some quick separation. Dallas County struggled to hang around after that, as the Bulldogs pulled away for their first of two consecutive 25-12 wins.

Up 1-0 in the match with confidence, Montevallo didn’t relinquish the momentum. In almost identical start to the second set as what they put together in the opening set, the Bulldogs jumped out to an early lead and never looked back.

Dallas County now faced an uphill battle, needing to win three sets in a row to pull off a comeback victory with momentum on the opposing team’s side.

The Bulldogs knew that they had the advantage and the Hornets were struggling to find a rhythm, which led to Montevallo coming out and putting together its most dominant set of the night and one of the best performances of the year.

The Bulldogs jumped out and never relinquished the lead in a relentless effort to pick up a 25-4 set win to close out the 3-0 victory.

With the win, Montevallo has now beaten every team in its area at least once. The Bulldogs have swept Dallas County twice and Bibb County once, and also beat West Blocton 3-1.

They still have one more matchup left against both Bibb County and West Blocton, both on the road. Wins in those two would lead to a perfect season of area play and the No. 1 seed in their area going into the area tournament.