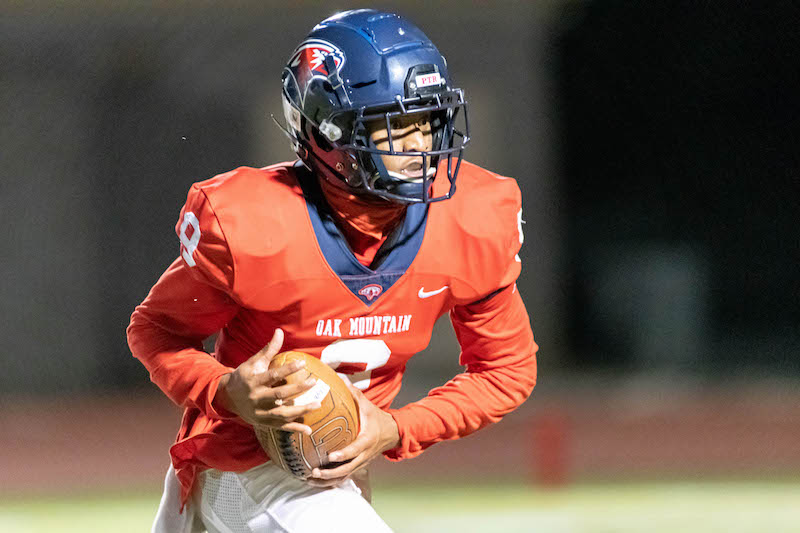 Normally we name our SCR Stars of the Week at the end of the Shelby County Football Show each week, but with surgery scheduled for Monday, I won’t be able to do the show this week and wanted to make sure we still honored the top players from a busy week of region play this past Friday.

Take a look at the special performances from Friday night below:

Ryan Peppins, athlete, Thompson: Ran back the opening kick off 98 yards for a touchdown and had nine receptions for 156 yards and another two touchdowns.

Evan Smith, quarterback, Oak Mountain: Smith had a touchdown in all facets of the offense, posting at least one receiving, one rushing and one passing touchdown in a 48-17 win against Spain Park. He finished 6-of-8 passing with 68 yards and two touchdowns, while adding 100 yards rushing on nine carries and 42 yards receiving on one touchdown catch.

Gabe Gamble, running back, Pelham: He ran for 107 yards on 11 carries, including the go-ahead touchdown in the third quarter that put the Panthers ahead for good in a 34-18 win against Wetumpka.

Dylan Peterson, running back, Pelham: Peterson finished with 91 yards and a touchdown for the Panthers in the win.

Will Lankford, quarterback, Pelham: Finished with 49 rushing and 79 passing yards, but was especially key with his two touchdowns.

Collier Blair, running back, Chelsea: Ran for 97 yards and two touchdowns for Chelsea in a 56-0 win against Woodlawn.

Luke Reebals, running back, Briarwood: Ran 16 times for a jaw-dropping 199 yards and two touchdowns to lead the Lions to a 42-19 win against Shades Valley on the road.

Shelby County defense: Made two key interceptions against Central-Tuscaloosa in a 17-14 win. Kaden Cardwell and Isaac Goodman were the two who made the big plays.

Kai Barnett, kicker, Shelby County: Made the game-winning field goal with 1:53 to play.

Joseph Anderson, running back, Montevallo: Anderson finished with a remarkable 217 yards and two touchdowns on 24 carries to help lead the Bulldogs to a 29-28 win over West Blocton.

Gio Hernandez, kicker, Montevallo: Hernandez sit the game-winning kick through the uprights as time expired for the Bulldogs to lead them to a one-point win.