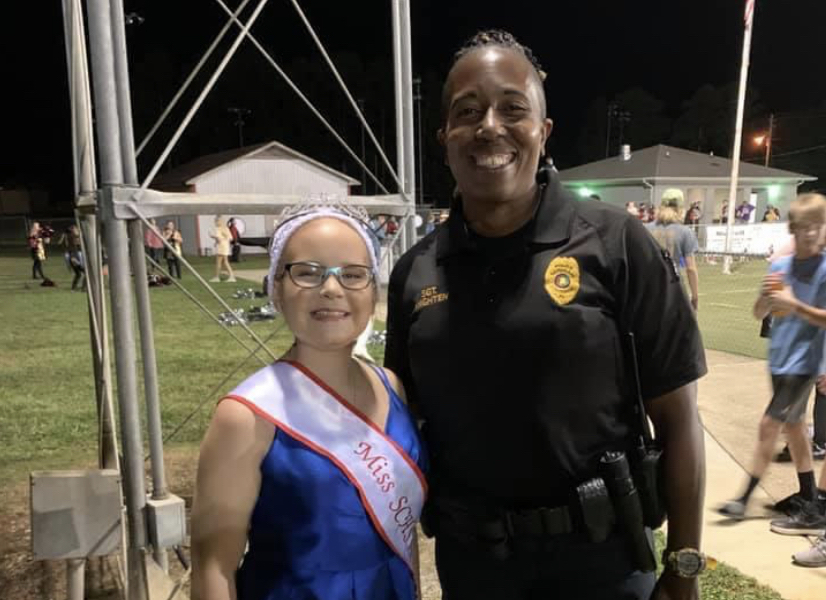 The 2020-21 Miss SCHS Mollie Wilder joins the ranks of the school hostess sisterhood with sergeant Sasha Lilly, who happens to be a past Miss SCHS. (Contributed)

No one knows exactly how long the tradition of Miss SCHS has been held at Shelby County High School, but it is one that is unique to one of the oldest high schools in our county.  Miss Mollie Wilder is the latest student to take on the honor of this role.

Mollie Wilder, a long time sweetheart of Columbiana that the town gets behind several times a year at a blood drive that honors her and the fight she had with childhood cancer, is the perfect inductee into this role. “All the other county high schools have teams of ambassadors that go by different names, Shelby County High School is the only school that has a sole hostess,” Mrs. Twyla Fryer, SGA coordinator told us. Being the oldest high school in the county, and at the county seat, it makes for a very special tradition for the whole county.

Miss SCHS is basically the “face” of Shelby County High School for a year. Typically, the bearer of the title, decided upon by the student body, is inducted by the previous holder of the position at the end of each school year. This gives her the summer to prepare to take on her duties as the official school hostess at the high school. Whenever special events that bring in guests to the school occur, Miss SCHS is there to welcome and give tours or anything else that might be needed.

But as with everything else, the pandemic put a kink in that tradition when the 2020 school year shut down early in March, leaving the school with no named Miss SCHS heir to prepare for the 2021 school year.

This year the position was announced at the Sept. 25 home football game, just one week before one of the most important duties of Miss SCHS, that of presiding over the homecoming court. It was also her first duty of the year.

Typically, the much anticipated community pep rally, traditionally held on Columbiana’s historic Main Street, is the first event that Miss SCHS presides over right before the first football game of the year. Due to the nature of the tight crowd that event produces, it was the first of many traditions that had to be missed due to safety precautions. “My favorite duty as Miss SCHS last year was hosting the community pep rally. I was so sad that Mollie didn’t get that experience this year,” former Miss SCHS, Morgan Jefferies told us, “but I was so happy to get to pass the crown to Mollie. I even cried a little I was so happy. We’ve known each other since we were little, and I know she’ll be a great Miss SCHS.”

The role of Miss SCHS may look a little different this year since there won’t be as many guests at the school due to COVID-19, but Fryer has no doubt that Mollie will find her niche this year and make the most of her position, which she is still learning about due to the late start. She has a long list of women that have gone before her including Sergeant Sasha Lilly, whose face most every student in the Columbiana School system knows, to draw wisdom from if she needs it.