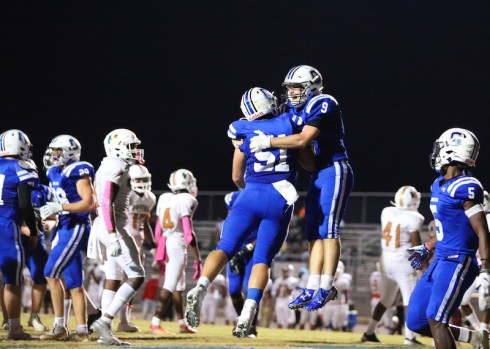 Chelsea player celebrate a thrilling 35-34 overtime win against Huffman on Thursday, Oct. 8. (For the Reporter/Cari Dean) 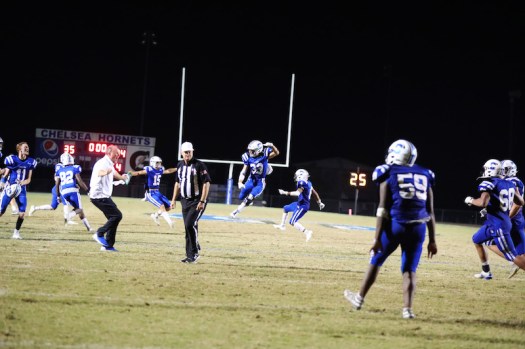 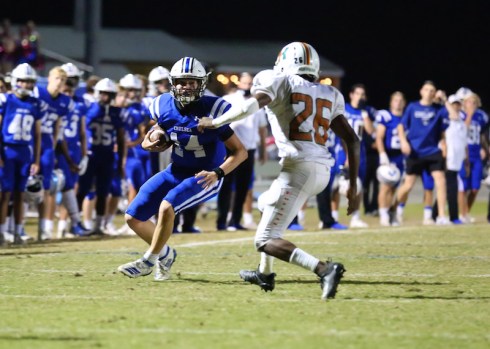 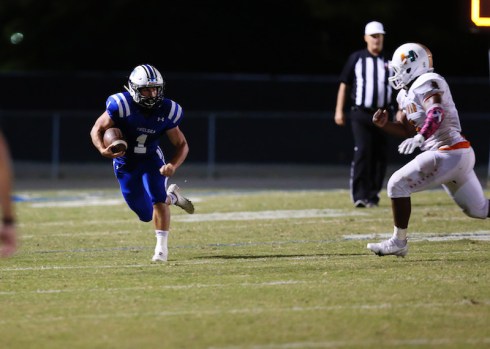 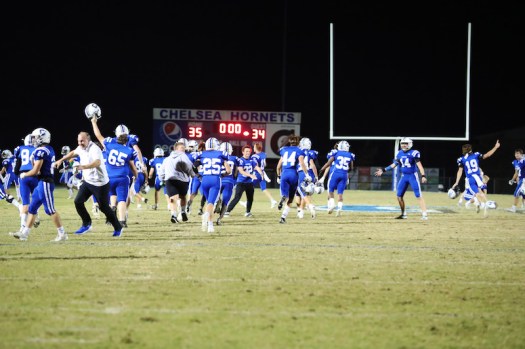 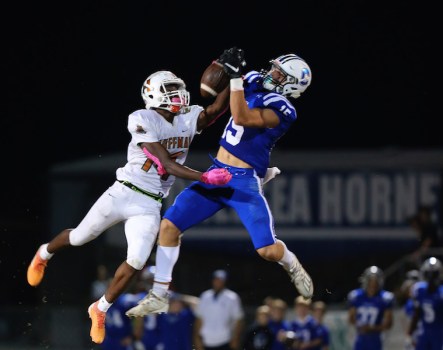 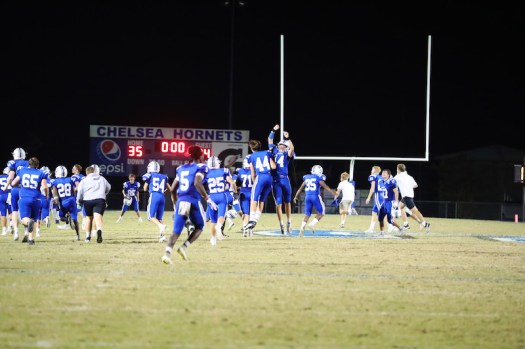 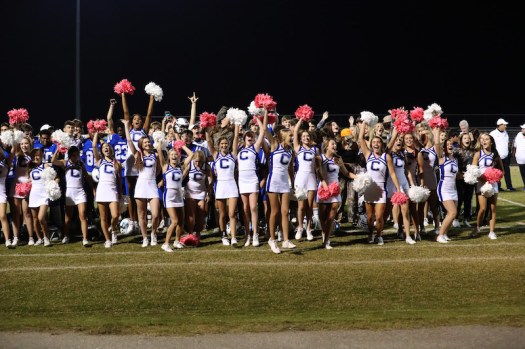 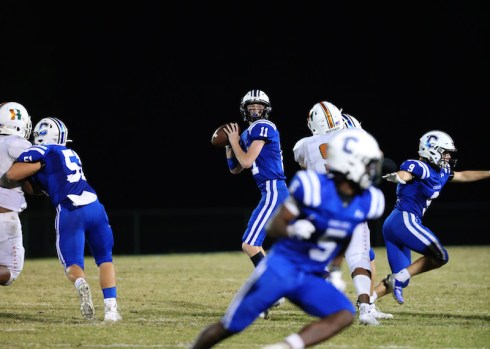 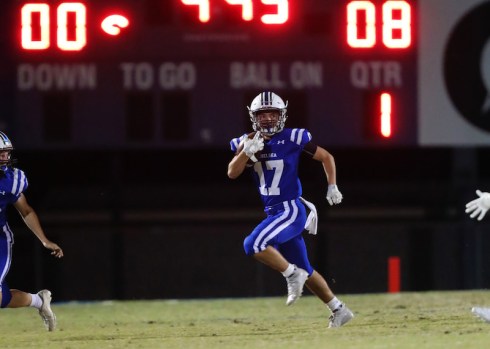 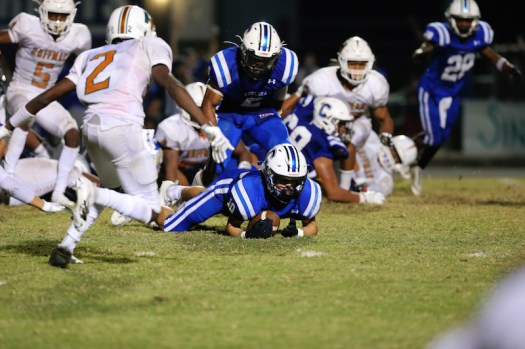 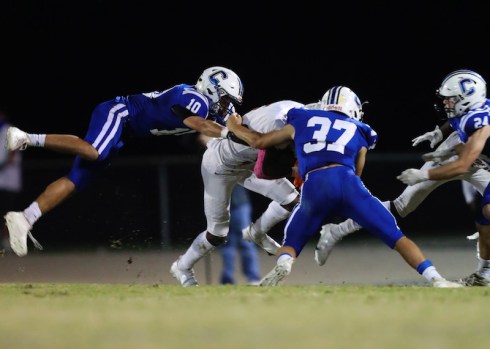 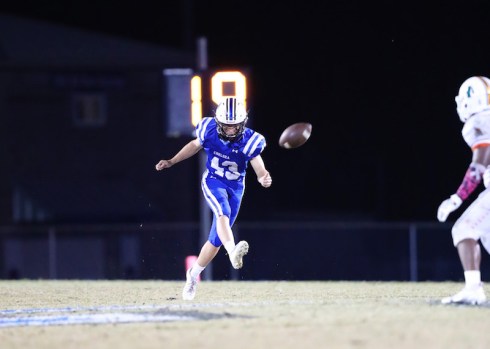 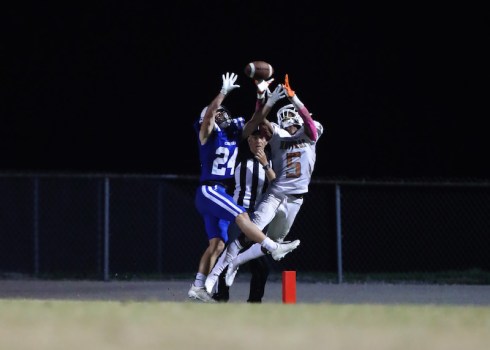 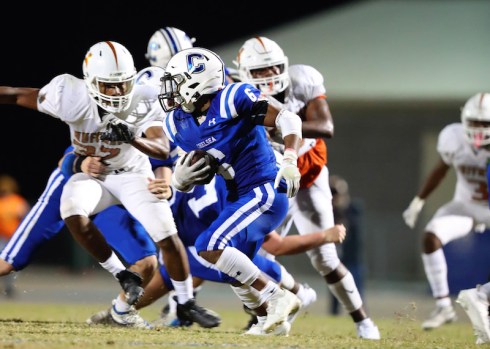 By MARK McLAUGHLIN | Special to the Reporter

CHELSEA – In a game highlighting offensive passing, the Chelsea Hornets took down region opponent Huffman on Thursday, Oct. 8 with a 35-34 overtime win for their second in a row.

Trailing 22-14 at the half and 28-20 with less than three minutes to play, the Hornets never wavered and were able to make late plays to pick up the win.

After Huffman took the 28-20 lead, the Hornets set up a quick six-play scoring drive capped off by an Adam Reaves 2-yard touchdown run followed by a Donavan Bivens 2-point conversion to tie the game with54 seconds left in regulation.

Huffman set up a drive to the Chelsea 3-yard line but a field goal attempt by Deanthony Jett was no good and at the end of the fourth quarter, leading to overtime.

Overtime started with a two-play drive capped by a Reaves 1-yard touchdown run for a quick 35-28 adantage for the Hornets.

Huffman’s Makhi Hughes then scored on a 10-yard rush. But the Vikings attempted a 2-point conversion which was unsuccessful on a great defensive play, preserving the win.

“We’re incredibly proud of our kids,” Chelsea head Coach Dustin Goodwin said of the hard fought win. “We talked to them about being resilient; they fought their tails off for four quarters and an extra period in overtime. We had our backs against the wall, multiple times and continued to fight and press forward. It wasn’t always perfect. We made plenty of mistakes that we can work on but ultimately came out on top. It’s awesome to see.”

Sophomore quarterback Hayden Garrison had 287 yards and one touchdown on the night and running back Collier Blair had 66 yards rushing. Wide receiver Gabe Ruffin had 80 yards receiving for 404 total offensive yards for the Hornets.

Huffman scored in a seven play drive, and added a 2-point conversion to start the night with 9:47 left in the first quarter to take an early 8-0 lead

Chelsea received the kickoff and went to work with an 11-play drive to score with a Reaves 3-yard run to make it an 8-7 game with 5:56 on the clock.

Both teams changed possessions, then the Vikings Makhi Hughes capped off a seven-play drive with a 23-yard touchdown to end the first quarter with Huffman in the lead 14-7.

As the second quarter started, Huffman recovered a fumble but was unable to capitalize. With 1:26 left in the second quarter, the Vikings struck again on a 74-yard touchdown pass and added a 2-point conversion to further the Huffman lead 22-7.

On Chelsea’s next possession, Garrison threw a 15-yard touchdown pass to Reaves, to bring the Hornets closer at 22-14 going into the break.

In the third quarter, Garrison connected on a 60-yard pass completion to Gabe Ruffin set up great field position for the Hornets going into the fourth quarter.

With 11:31 left, Reaves rushed for a 5-yard score to chip away at the Huffman lead. After the Chelsea 2-point conversion failed, Huffman held on to a 22-20 advantage.

After two Chelsea turnovers, the Vikings Makhi Hughes scored on a 7-yard run.

That’s when the Hornets finished off an incredible comeback with the game-tying touchdown and overtime success to pick up the win.

Chelsea is now 3-4 on the season and 2-2 in region play with playoff hopes still alive.