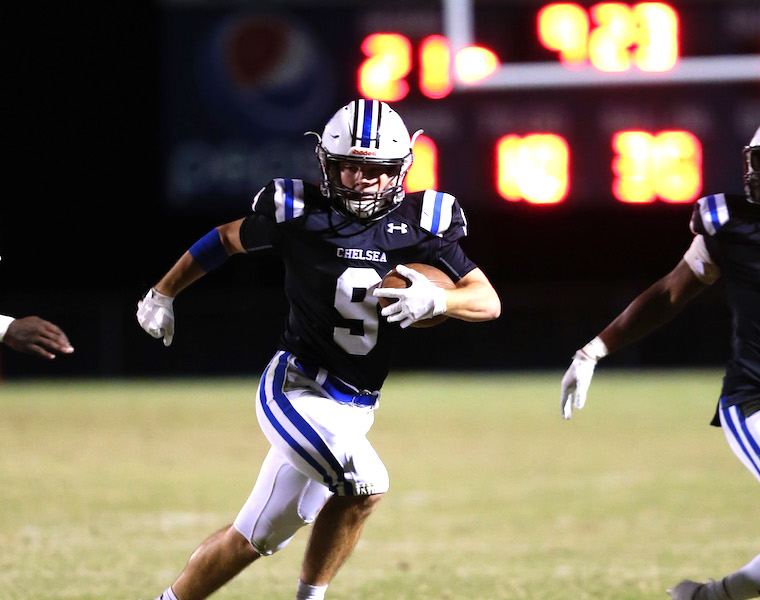 The Chelsea Hornets couldn’t overcome struggles early in a matchup with Shades Valley, eventually losing to the Mounties 35-12 on Oct. 13. (For the Reporter/Cari Dean)

IRONDALE – In a game against the Mounties, Chelsea couldn’t overcome a mountain of turnovers and mistakes as the Hornets dropped a 35-12 region game on the road at Shades Valley on Friday, Oct. 13.

Chelsea lost a fumble on the first play from scrimmage, and from there, it was an uphill battle the rest of the way that ultimately got worse in a rough first quarter for the Hornets.

After the fumble on the first play, Shades Valley quarterback Earl Woods scored a few plays later on a 1-yard quarterback sneak for a touchdown that became the first of four touchdowns for the Mounties offense in the opening quarter.

“Well, we made a lot of mistakes against a really good football team and it’s really hard to believe what their record is the way it is,” Chelsea head coach Dustin Goodwin said. “They’re coached well and took advantage and opportunities when they had them and ultimately the scoreboard showed what happened.”

Trailing 6-0, Chelsea quarterback Hayden Garrison was sacked and stripped of the football, which led to another Shades Valley touchdown as Woods scrambled for 2 yards. The 2-point conversion was good to extend the Mounties’ lead to 14-0.

Chelsea’s defense struggled to stop the Shades Valley rushing attack and passes to the fullback in the first quarter as the Mounties’ third offensive possession was a 64-yard scoring drive capped off by a 4-yard touchdown to make it 21-0.

Trailing by three scores, Chelsea had a promising drive going near the end of the first quarter but on fourth-and-15, Garrison was intercepted in Shades Valley territory, which led to the fourth touchdown of the quarter for the Mounties.

Following the interception, Shades Valley drove 77 yards and scored on a 4-yard touchdown to extend its lead to 28-0 at the end of the opening quarter.

Chelsea’s main highlight of the game came early in the second quarter with the ball at its own 8-yard line. Chelsea running back Adam Reaves took the handoff and broke several tackles before racing up the sideline 92 yards for a touchdown to cut the deficit to 28-6.

Unfortunately for the Hornets, they had no answer for the Shades Valley offense as the Mounties put together another long drive following the Chelsea touchdown to take a 35-6 halftime lead.

In the second half, Shades Valley used its rushing attack to milk the clock and leave no chance for a Chelsea comeback.

While the Chelsea defense kept the Mounties off the scoreboard in the second half, the Hornets were stagnant offensively and scored a final touchdown on a scoop-and-score with 11 seconds remaining to make the final score 35-12 Shades Valley.

“I thought the guys played hard for four quarters and coach switched some things up at halftime that probably helped a little but ultimately we’ve got to get the ball back and when you get it back, you’ve got to score points,” Goodwin said.

With the loss, Chelsea dropped to 3-5 overall and 2-3 in region play.