Lightning Strikes back for homecoming win 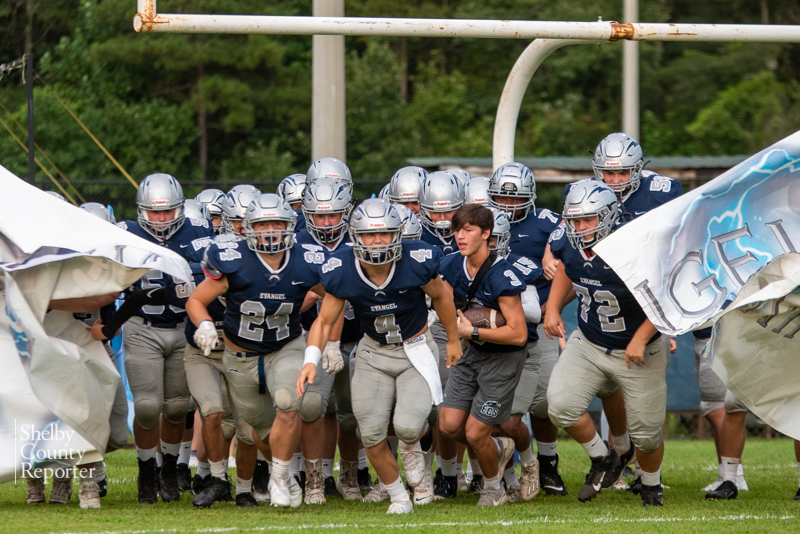 The Evangel Lightning picked up a 49-32 win against Freedom on Oct. 16 thanks to a strong second-half rally. (File)

ALABASTER – Evangel Christian School outscored the Freedom Cowboys 33-6 in the second half to rally for a 49-32 Homecoming win Friday, Oct. 9.

Freedom took a quick 14-0 lead to open the game, scoring on its first drive before forcing a fumble and driving 60 yards for a second touchdown and 2-point conversion.

“They run the ball. If you’re not careful, they’ll 4-yards you to death, and that’s what they did the first half,” said Evangel head coach Tim Smith.

ECS failed to gain ground again, backed up with a fourth-and-10 deep in their own territory when Smith chose to call a fake punt the team had worked on all season. Jett Lodge found Timothy Howard on the pass, which turned into a 59-yard touchdown. Quarterback Eli Whitfield, in his first game back from injury, ran in the 2-point try to make it 14-8.

The Lightning forced a turnover on downs at the ECS 20, but another fumble, the second in five plays, gave the ball back to the Cowboys. Freedom scored again on a short run, to extend its lead, 20-8.

Lodge started the game at quarterback, completing 3-of-7 passes for 89 yards and a TD before Whitfield took over. Whitfield needed only three quick passes to move the Lightning 60 yards to score on an 18-yard pass to Howard. Lodge caught the 2-point pass to cut it back to six points, 20-14. Freedom recovered the onside kick and punched in its third touchdown and then intercepted a pass to send the Cowboys into halftime with a 26-16 lead.

“We challenged them at the half and told them, ‘if you don’t man up right here and fight back, you’re going to get beat.’ I could tell when we were stretching coming out of halftime we were going to be OK,” Smith said.

The Lightning lassoed the Cowboys into three-straight three-and-outs and scored each time to start the second half.

A bad punt early in the third quarter gave Evangel the ball at the Freedom 21. Whitfield hit Lodge on a quick 10-yard touchdown pass, followed by a Bradley Davis 2-point catch to pull within two points, 26-24.

An onside kick attempt was unsuccessful again, but the Lightning stopped the Cowboys on downs at the ECS 14. Shortly after, Whitfield threw a 66-yard touchdown to Davis to take the lead, 30-26.

Howard and Davis each scored again to stretch the lead to 42-26.

Whitfield finished the night 9-of-13 passing for 218 yards and three TDs. Davis led the way with 118 yards on two catches, both TDs. Howard scored three times on three catches for 82 yards.

Zach Chandler recovered a fumble, Howard and Davis intercepted passes in the fourth quarter to keep the Cowboys from rallying. Tyler Wilson, also returned from injury, carried the ball eight times for 48 yards to help churn the clock in the second half. Lodge added a late fourth-quarter touchdown on a 28-yard run, followed by a Lucas Mast extra point to cap Evangel’s scoring, 49-26. Freedom scored with a minute remaining for its only second-half touchdown.

Howard led the defense with 13 tackles and a 26-yard interception return. Davis added 11 stops to his 48-yard interception. Dylan Weathers had 12 tackles, Lodge had nine, including two for a loss and a sack. Riley Mason also recorded a sack to go along with six tackles.

Evangel (7-1) will have an unexpected bye week before traveling to Evangel Montgomery on Oct. 30. ECS was scheduled to travel to Sugar Hill, Georgia on Oct. 23 to challenge Georgia Force Christian, but the game was canceled Oct. 16.