BIRMINGHAM – Normally a powerful kill comes off the hand of Emily Breazeale at the net, but on Wednesday night, Oct. 28, the sophomore outside hitter used touch to help the Spain Park Jaguars make history.

Leading McGill-Toolen 25-24 and up 2-1 in a semifinal match, Breazeale took a different approach and nudged the ball just over the tip of the net. McGill-Toolen, expecting a rocket shot, didn’t know how to react, as the ball hit the blocker’s hands, bounced into the net and slid to the floor.

As the ball bounced down, the Spain Park bench erupted and started charging toward an already celebratory group of on the floor, jumping in jubilation, as Spain Park won the set 26-24 and the match 3-1 to advance to their first state championship in school history.

This year’s magical run now has the Jags at 27-10 heading into the state championship after making it to the state tournament for the first time since 2003.

In one day, the Jags went from not competing in the state tournament for 17 years to winning an Elite Eight and Final Four match to cement a spot in the state championship match.

Taking on McGill-Toolen in the semifinals, following a 3-0 sweep of Auburn earlier in the day, the Jags got off to a strong start, but saw why the Yellow Jackets are the No. 3 team in the state.

Spain Park led for a large portion of the opening set, taking leads of 15-17 and 18-13. But the Jackets fought back.

But Spain Park felt like it let the set slip away.

The Jags came out in the second set believing they were the better team, and it showed. After falling behind 3-1, they went on a 9-3 run to take a 10-4 lead.

But the third set was the difference maker for Spain Park.

The Jags, who had led for the majority of the first two sets, faced some adversity in the third set. They fell behind by as many as seven points at 16-9, and looked like they were headed to a 2-1 deficit.

But instead, Spain Park responded with an 11-4 run to tie the set at 20-20. Then, Clara Paulsen stepped to the service line and sent a rocket over the net that slid right off the returning player’s hands for an ace that tilted the scale in favor of the Jags.

From there, they went on to win the set 25-23 in comeback fashion to completely swing momentum in their favor with a 2-1 lead.

In the fourth set, Spain Park fell behind 3-0 early, but bounced back again with a 7-2 run to jump in front 7-5. The Jaguars then eventually grabbed a 16-12 lead and were in control.

But the Yellow Jackets had one more push in them.

They fought back to even the set at 18-18, which led to more back-and-forth between the two teams.

But Spain Park never fell behind, taking a one-point lead to break each tie, eventually earning match point at 25-24. That’s when Breazeale slid the ball over the net for the winner to send the Jags to the title match.

Spain Park will now square off with crosstown rival Hoover in the state championship match. The Bucs have lost just one match this year and sit at 49-1 going into the title match and are looking to win 50 games in a row to close out a state championship season after opening with a loss to McGill-Toolen.

See all our photos and purchase images at www.shelbycountyphotos.com 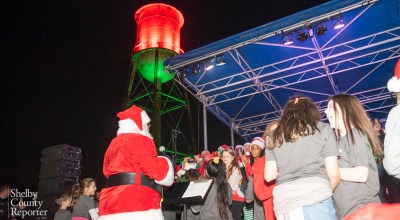