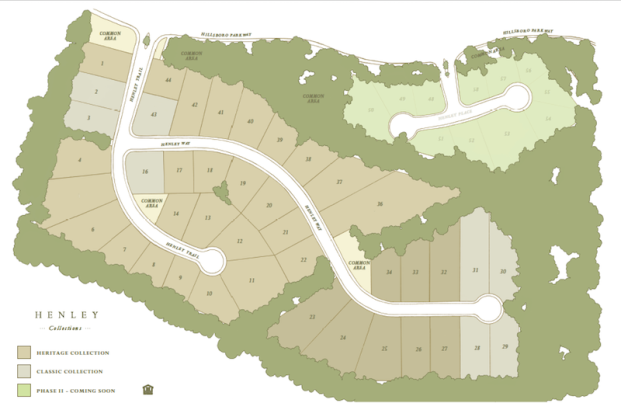 Henley, the next phase of the Hillsboro neighborhood in Helena, has several homes under construction with lots also available. (Contributed)

Henley neighborhood making progress as next phase of Hillsboro subdivision

HELENA — The second phase of construction in the Hillsboro subdivision is well underway with the new neighborhood, known as the Henley subdivision, already has houses under construction.

Newcastle Homes is responsible for developing the new neighborhood as part of a larger plan to bring more commerce and living space to the Hillsboro subdivision off Hillsboro Parkway.

“Henley is an enclave of homes nestled just off Hillsboro Parkway in historic Helena. It follows the success of Appleford, the first phase of the mixed-use community,” according to Newcastle’s website.

This neighborhood is part of the same development announced earlier in the year that is designed to bring a new retail shopping center and improvements for the trail system that surrounds Helena.

Houses have already started popping up in the subdivision as construction continues. The neighborhood was originally intended to be completed earlier, however, like many other things this year, delays were caused by the COVID-19 pandemic.

These neighborhoods and the retail development were approved back in the early 2000s, but were originally halted because of the economic recession at the time.

There is not a set date for when the construction will be complete, however, with the process moving along, Newcastle anticipates that new residents will be able to move in soon with lots also still available.

Henley follows the success of Appleford, which was the first phase of the mixed-use community. The majority of homes in the neighborhood will have basements, while a limited number of non-basement homes will be available.