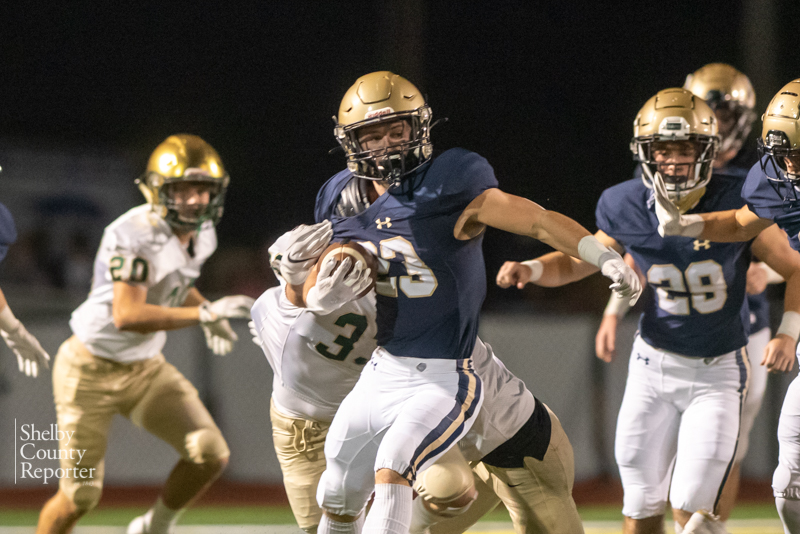 Luke Reebals had a huge night for Briarwood to help lift the Lions to a 42-7 win against Corner to end the regular season. (File)

NORTH SHELBY – After finishing up regional play last week, Briarwood closed out the regular season on Friday, Oct. 30 with a dominant 42-7 win against Corner to carry momentum into the postseason.

“You always want to go into the playoffs playing good football, and I think we played good, physical football,” Lions’ head coach Matthew Forester said. “We might have started off a little slow, but we picked it up and did a really good job.”

After exchanging a few long but scoreless drives, Briarwood finally hit pay dirt with three minutes to go in the first half. Luke Reebals took the ball around the left side with several Yellow Jacket defenders on his tail.

After shrugging off one tackler, Reebals cut to the inside of a wall formed by his blockers before going 53 yards to the end zone to top the 1,000-yard mark and give the Lions a 7-0 lead.

Briarwood’s defense was able to force a quick three-and-out on the corresponding drive from Corner. After the punt, Briarwood’s offense took the field with a chance to blow the game wide open. That is exactly what they did.

On the first play of the drive, Vizzina dropped back in the pocket before finding Eli Steadman streaking behind the safeties. Vizzina threw a perfect pass to keep Steadman in stride, and the senior wideout walked into the end zone untouched to give his team a 14-point lead going into the locker room.

That gave the Lions confidence going into the locker room and they didn’t relinquish it in the second half.

It started when Reebals returned the opening kickoff of the second half 93 yards for a touchdown.

After another three-and-out pitched by the Lions’ defense, Vizzina would find Brooks Donnelly open in the end zone for his second touchdown of the night, while Reebals found the end zone for the third time on the night a drive later.

Shortly after, Tyler Waugh put the final nail in the coffin with a pick-six. Briarwood’s defense was just too fast for the Yellow Jackets to get anything going.

Briarwood cruised from that point to a 42-7 win against the Yellow Jackets behind a balanced offensive attack and a suffocating defense that didn’t surrender a single point until garbage time.

Briarwood will now get set to take on a physical and good defensive Hartselle team at Lions Pride Stadium in the first round of the playoffs on Nov. 6.