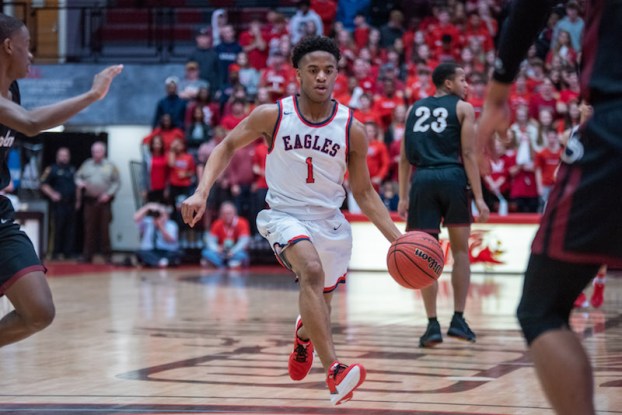 NORTH SHELBY – The Oak Mountain boys basketball team came up just one game and eight points away from a chance to play for a state championship last year.

The Eagles return nearly everyone from that historic Final Four run, but will be missing two seniors, including Zane Nelson who led the team in scoring and was named the county’s Player of the Year last year.

Head coach Chris Love knows what it will take to get back there, but wants to take it week by week.

“We’re just trying to get better right now,” Love said. “If we improve in November and December, then play our best ball in January and February we feel like we can do something special, but all that is immaterial right now if we aren’t focused.”

Love knows Nelson was a special player, and he’ll look for his team to replace his production by committee.

“Zane had as good a senior year as I’ve been around. He was our energy guy, talked crap in practice and he put us on his back late last season,” Love said. “We’re missing that energy and he was our best scorer, but we’ll make up for that loss being a little bit more patient on offense, making extra passes and all five on the floor will have to be special now.”

Junior Will Shaver will play a big part as he emerged last year as a big, inside-out threat, but according to Love, people may not recognize him when he steps out onto the floor.

He’s lost 40 pounds, dropping to 245 and his new body is giving him a chance to expand his skill set.

“He’s so much more athletic, he’s moving so much better and he’s just a different player,” Love said. “He’s taken his game to another level. He can guard on the perimeter, he’s always shot the three, but now he can drive by you—and the key has been his body.”

The Eagles may get some starters back soon as well, as junior point guard Evan Smith and senior forward Noah Young will soon begin their playoff run on the football team.

Young is also Smith’s top receiver and they have an unspoken connection whether it’s on the field or the court.

He describes Patrick as a guy every coach loves to coach and a guy that will “do the dirty work” for the team. The seniors put in a lot of work in the offseason for the upcoming grind.

“I definitely worked on my body more than I have in the past and I’m up 15 pounds,” Patrick said. “I worked on my shooting and ball handling a lot more and then I wanted to improve my leadership just being a senior on this team.”

Love feels his seniors are key to the success of this team. He was able to keep Freel on junior varsity last year where he performed well and the coach feels he’s progressed to the point where he can contribute valuable minutes.

“I worked on my shooting and ball handling too, but also my footwork,” Freel said. “I got in the weight room too, just be stronger in the post.”

The Eagles will also return junior guard Wilder Evers, who has the chance to be a top scorer and defender in the county this year as a returning starter.

Brady Dunn, the younger brother of Drew Dunn, should add a strong shooter from beyond the arc, while several others will contribute.

The Eagles will need to be strong top to bottom with different guys stepping up each night. They have leaders, shooters, height and length. Once Chris Love’s entire team comes together, it’s absolutely a threat for another deep playoff run.