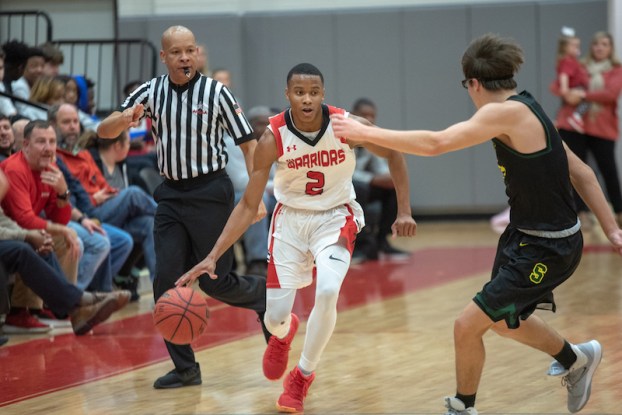 Thompson’s Grant Hopkins, above, will look to help lead the Warriors back to the Sweet 16 this year during his senior season. (File)

ALABASTER – When it comes to basketball, Class 7A is full of twists and turns locally. Two years ago, the Thompson Warriors exceeded expectations making the Sweet 16 in Dru Powell’s first year at the helm. Last year, Oak Mountain and Spain Park became the surprise of the postseason as they both made impressive runs.

Now, in 2020, Powell’s Warriors will look to reclaim a spot in the playoffs after 20-plus win campaigns in each of his first two years at Thompson.

Several upperclassmen from his magical first season also return, determined to not let another chance slip away. Powell is confident the guys he’s been coaching for three years will be able to pass that along through the rest of the squad.

“I feel like we have good leadership at the top, we’ve got four or five guys who have been playing varsity now for three or four years so we’re excited about their leadership bringing the other guys along,” Powell said.

Grant Hopkins and Brad Lewis will be part of a core of seniors and multi-year starters with great expectations. Hopkins will quarterback the offense and defense on the court and can attack in multiple ways.

The senior says he’s been improving on his play-making and decision-making skills, which should scare opponents as one of the most efficient players in the region.

Lewis has been playing big in the paint throughout his high school career. An athletic guy with an incredible vertical, he has been able to make up for his lack of traditional center/power forward height, but is looking to add more weapons to his arsenal.

“One of the big things me and coach Powell talked about in the offseason was working on my shot,” Lewis said. “I’m working on expanding my game to more guard position skills. Last year I didn’t shoot as well I wanted to, so if I can do that it’ll help space out the floor and help our team out.”

Chaney Johnson, now at the University of Alabama-Huntsville, was exceptional last year for the Warriors. A lanky player who could play in the post, rebound and shoot from long range, Johnson had a unique skill set, but his intangibles and the example he set sticks in Powell’s mind as an example and player that will be tough to replace.

“He’s brought these guys along as well as younger guys on our team,” Powell said. “He’s instilled values and work ethic in these guys, Chaney was an extremely hard worker and I think he helped pour the foundation for our program in terms of: to get to where you want to go you’ve got to be willing to work.”

The Warriors lost long0range specialist Zach Littleton, but return senior Jack Dorolek who can also light it up from deep. Senior J.B. Mitchell will also rejoin the team once the football season concludes.

They also bring in more height, an aspect that’s been missing during Powell’s short time in Alabaster, but one he’s looking forward to employing this season.

“Last year to this year, I feel like we probably lost a little athleticism, but we gained some height and that’s a trade we’ll gladly accept,” Powell said. “We’ll play with a different pace of play and lean on our leadership who have been in the battles. Really excited about the opportunity to have some height and bring those guys along.”

Powell is referring to Wesley Roberson and Braden Smith, a pair of 6-foot-5 juniors who will bring a different dynamic to Thompson on both sides of the floor.

The disappointment from a solid, yet unfulfilled season still lingers, but Hopkins and Lewis are ready to take that playoff spot back.

“Winning is what people look at. It’s very important for us to win, but it’s also fun to pass that down to the young guys so they see how important winning is and how much fun it is,” Hopkins said. “We want to get back to that and even further this year.”

“I definitely want to get back to the Sweet 16,” Lewis said. “Coming up as a kid watching Thompson basketball and watching them get to the postseason, I always said ‘When I’m a junior or senior I’m going to be in the state championship at the BJCC,’ so it’s just something that I want to experience and get my teammates there.”

Powell has the experience and leadership he needs to reach another 20-win season. But the Warriors’ goals reach far beyond that as they eye a return to postseason play.