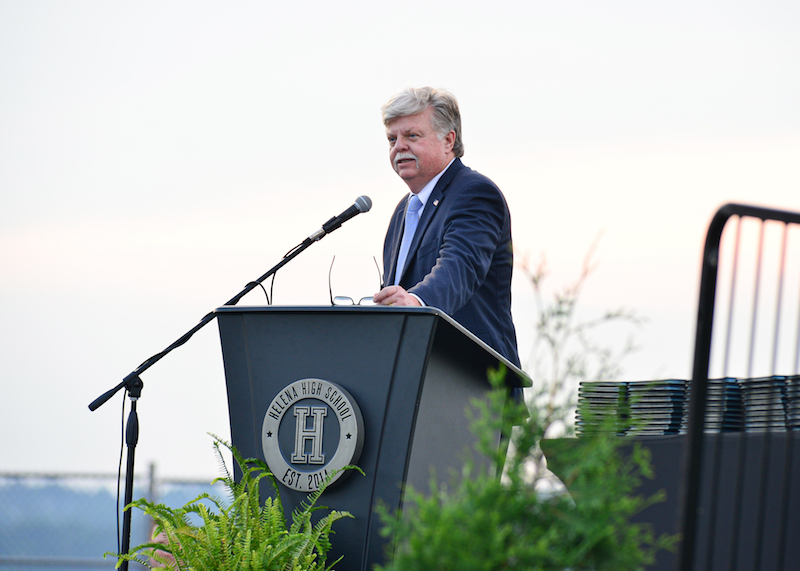 Mark Hall served Helena for eight years as the mayor, but decided not to run for reelection, causing him to reflect on his time in office. (For the Reporter/Jeremy Raines)

HELENA — Having been in public service for a good portion of his life, with the last eight years as mayor of Helena, Mark Hall said he found success by applying simple philosophy to everything he did.

“Nothing is too small, everything is important,” he said.

Thinking back on the last eight years as mayor, he reminisced about everything the city was able to accomplish through that mindset, seeking to accomplish projects both big and small for the betterment of the city.

Some of the things he is most proud of, are the improvements that were made to benefit youth in the city

“We built two sports fields for the youth league, we built a youth football field and the first dedicated youth soccer field that the city ever had. I was very proud of that,” Hall said. “We ended up doing over $9 million worth of donations and projects to our schools.”

Like many cities one of the biggest challenges that Helena faced during his term was infrastructure, specifically when it came to roads. As mayor, Hall recalled wanting to work as hard as possible to address what was within his power, and find ways to address what was not.

“One of the things I’m most proud of is the $2.5 million grant from federal and state money with the regional planning commission to totally revamp the intersection at Helena Elementary and the post office, which is it in the works right now,” Hall said. “I am also very proud of constantly visiting the Alabama Department of Transportation and finally getting them to agree to put $30 million toward lining Highway 261.”

When he entered office, Hall said that the city’s reserve fund was basically empty, and he set a goal of working to build that up to $2 million, and as he departs the fund is around $4 million.

Making sure that city employees were fairly compensated also weighed heavily on his mind as mayor.

“One of the other things I’m most proud of is when I took office, the employees had not had a raise in several years because of the economy,” he said. “Once the economy came back, their salaries raised every year I was in office and they got cost-of-living plus some other things to boost morale.”

Through careful spending and planning, the city was able to purchase new vehicles for police cars, fire trucks and transport command vehicles among other things.

Hall said one of the things that helped make the projects so successful was the great working relationship he had with the city council.

“I had the cooperation of the council on all the projects. We had a very good working relationship,” Hall said. “I don’t ever remember being turned down for a project I presented to the council and that’s unheard of, especially for cities in this area.”

Looking forward, Hall said that for the city to continue improving, the city should strike a balance between growth and infrastructure. Particularly improving water systems, roads and bridges and bolstering the education system that makes Helena so attractive for young families.

Above all, the key to successfully running a city is listening to those who you represent, Hall explained.

“I think that’s what separates us from a lot of other cities, and it keeps a lot of things from becoming problems,” he said. “If you address those concerns of your citizens immediately and try to work with people as best as you can, most people are willing to understand if someone takes the time to explain those to them.”

Since leaving office, Hall has accepted a position as Director of Community Management for Greystone and is always keeping his eye open on possibilities for the future.

“Who knows, I may surface again with some other political aspirations. At different levels down the roads we will see what the next year brings,” he said.