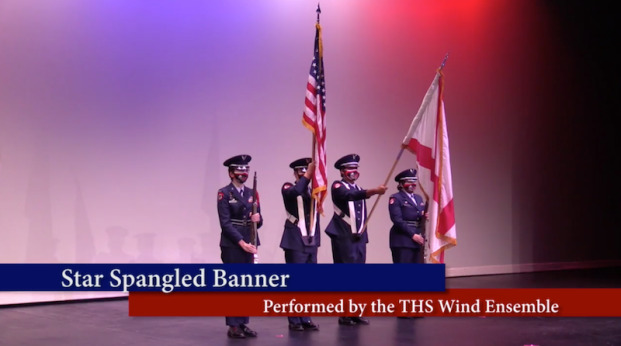 Alabaster City Schools hosted a virtual program on Veterans Day this year to honor all veterans who fought for our country. (Contributed)

ALABASTER – All schools in the Alabaster City School System teamed up to honor veterans virtually this year. Despite not being able to hold an assembly, Thompson Middle School seventh and eighth grade choir director Dori Hardee prepared a presentation to send out to parents, students and veterans on Veterans Day.

Hardee said this was a group effort including all five of the city’s schools.

“Back in August it occurred to me that it wasn’t going to happen because we can’t gather, and I didn’t feel like that was right. We need to honor those who do things much bigger than we do,” Hardee said. “One of the songs we were learning was ‘What a Wonderful World’ and it was a reminder for me that the world can be better again, we just have to be patient.”

The 18-minute tribute included contributions from the elementary, middle and high schools in Alabaster, as well as teachers who have served in the military, according to Hardee.

“We went to the English teachers and asked if those kids would be willing to write a thank you letter for veterans. We reached out to elementary, and it evolved into something that could have all of our schools involved,” Hardee said. “The song is interlaced with the thank you notes. Then, the national anthem by the high school and middle school. Coach Ron Munday is a veteran himself. He was with the Marines and he was our keynote speaker, and we closed with ‘What a Wonderful World.’”

Hardee said the virtual tribute is important because it sets an example for the next generation.

“If we stop, then what are we teaching the kids? If we don’t honor those who serve our country or us? This generation needs to honor them,” Hardee said.

Hardee said this is not the first time all of Alabaster’s schools have worked together.

“That’s what’s really unique about our district, our music teachers and choir elementary, we are very collaborative,” she said. “This is not our first collaboration project. We are a very strong team.”

By DONNAMY STEELE | Special to the Reporter After years of working toward his goal, Kyle Tolbert has completed his... read more