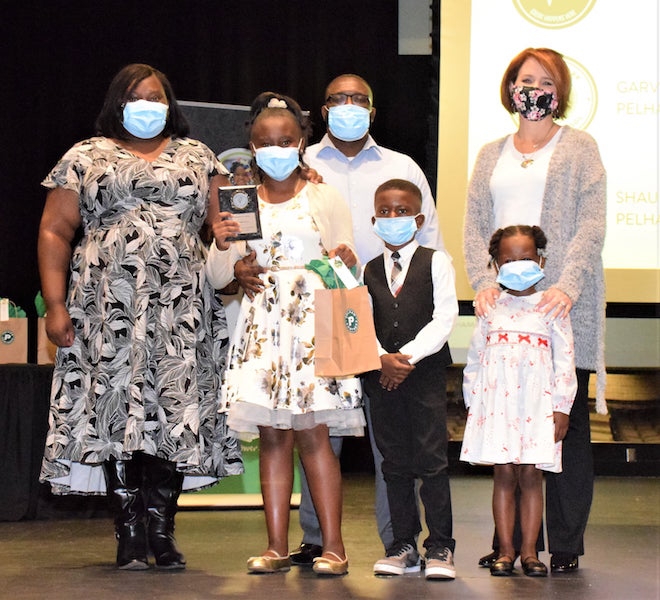 Pelham City Schools gave out its Character in Action Awards for the 2020-2021 school year during a special ceremony on Nov. 17, naming one student from each school. (Contributed)

PELHAM — Students from each school in the Pelham City School system recently received Character in Action Awards, which honor students who serve as positive influences on their peers.

PCS Communications Manager Nicole Knight explained that the award was given to those students because of the examples that they set for others.

“This is an annual award created through a partnership between the Shelby County Juvenile Court, the Shelby County District Attorney’s office and the three school systems of Shelby County, focuses on students who set good examples for other students to follow. Only one student from each school is chosen each year,” Knight said.

Chandler Foster, a fifth-grader at Pelham Ridge, was honored by the school system as someone who is a “kind and respectful model student.”

She was highlighted as setting an example of being responsible, kind and patient, as well as for her leadership skills.

A notable example is how she “chooses to play with the students who are not playing with others. She is inclusive and works well with others regardless of background or ability.”

At Pelham Oaks, fifth-grader Orlando Garcia Avalos received the award “for his kindness and willingness to help others.”

His award noted that “he is a positive role model and has the ability to bring out the best in those around him.”

The award recipient at PPMS was eight-grade student Garvin Thomas for being a good role model for fellow students.

Thomas was described as being very mature and a “voice of reason” for the other students there and always seeking to “put others first and encourage his classmates if he notices they are having a bad day.”

Finally, Shaun O’Neil, a senior at PHS, received the award for being an encouraging and inspirational figure to his friends and classmates.

His award described him a someone who “works well with others when collaborating on a lab or an activity, and he leads by example by doing the best job possible and encouraging others to do the same.”

These are only some of the reasons that these students were specifically presented with the award. Each of these students play immensely important roles in helping make the lives of their fellow students through their character and actions.