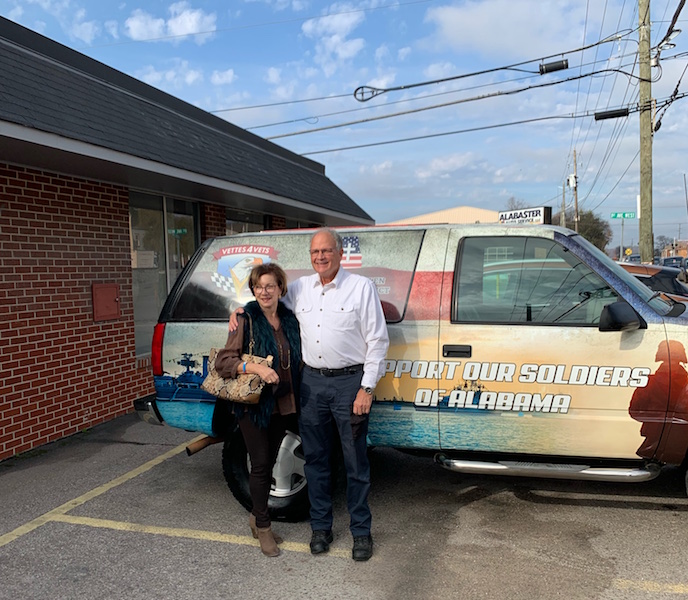 Tom and Charon Rivers, who founded Support Our Soldiers in memory of their son, Thomas Rivers Jr., stand in front of his 1999 Tahoe they donated to Support Our Soldiers of Alabama. Alpha Graphics of Hoover provided the wrap for the Tahoe, which Davis said was parked outside the nonprofit’s new facility in Alabaster at the open house, and will be used as a utility vehicle and marketing device for the organization. (Contributed)

ALABASTER – Support Our Soldiers of Alabama’s new distribution facility might appear ordinary on the outside, but the work happening on the inside is extraordinary for countless men and women serving in the military.

The nonprofit’s leaders hosted an open house in December for volunteers and members of Lance Cpl. Thomas Rivers Memorial VFW Post 12185 to celebrate the new location and share more about their efforts to send care packages to deployed troops overseas and to support veterans in need.

But before talking about the facility itself, Mark Davis, Support Our Soldiers of Alabama’s chief financial officer and U.S. Navy veteran, reverted back to the organization’s beginnings—and its founders’ vision for it.

Dr. Thomas Rivers Sr. and his wife, Charon, founded Support Our Soldiers in memory of their son, Marine Lance Cpl. Thomas Rivers Jr., a Briarwood Christian School graduate who was killed in action in Afghanistan in April 2010.

Charon led efforts to assemble and send out thousands of care packages to troops serving overseas every year.

After more than 10 years, she was ready to step back from the operation and focus more time on her grandchildren, Davis said.

Davis, who is also involved with Vettes4Vets and the Alabama Fallen Warrior Project, insisted on finding a way to keep the organization going.

He contacted Col. Danny Sample, U.S. Army veteran and owner of Siluria Brewing Company in Alabaster, who liked the idea and approached fellow Army veteran Tony Garcia and his wife, Tina, about helping.

With a new leadership team in place, Support Our Soldiers of Alabama became its own nonprofit entity.

“This is a God plan,” Davis said. “This all fell into place by one phone call.”

Next on their to-do list was finding a place to relocate the care package assembly operations, which previously occurred in Charon’s basement.

They found a vacant space at 106 1st Street Southwest in Alabaster, right down the street from Siluria Brewing, that offers just enough room—between 400 and 500 square feet—to put together care packages for shipping.

Tina Garcia, Support Our Soldiers of Alabama’s chief operating officer, oversees the packing and shipping of all of the boxes.

“There are so many people serving our country that feel like they’re forgotten or don’t get noticed for their sacrifice,” Tina said. “It’s just amazing to be able to give back to them a little box.”

The organization sent out more than 200 boxes from the end of November to mid-December, she said.

Local residents and groups have been generous in their donations to and support of the nonprofit.

At Spain Park High School, for example, students in 18 Social Studies classes in ninth-12th grades coordinated with the SPHS Armed Forces Club and club sponsor M.O. “Buzz” Williams to assemble hundreds of care packages full of supplies and words of encouragement for Support Our Soldiers to ship to troops overseas for the holidays.

Tina fulfills speaking engagements for the nonprofit and has spoken to the American Heritage Girls Group at Our Lady of Sorrows Catholic Church in Homewood and to the Hoover Service Club.

“We have other volunteers that have helped us,” she said, adding the nonprofit is preparing to send birthday packages to individuals overseas in the coming months. “We want this to go big time.”

Davis said Support Our Soldiers of Alabama is planning various fundraisers for 2021, too.

“We’re just picking up where Charon left off after 12 years,” he said. “We want to reach into the business community and schools.”

Davis said the most-needed items for care packages are socks and baby wipes.

Anyone who has a family member or friend deployed overseas and would like that person to receive a care package may send an email to sosalabama12185@gmail.com.

For more information about the nonprofit, visit @sosalabama12185 on Instagram, Support Our Soldiers of Alabama on Facebook or Supportoursoldiersofalabama.com.

Teachers, first responders, other essential workers next in line…