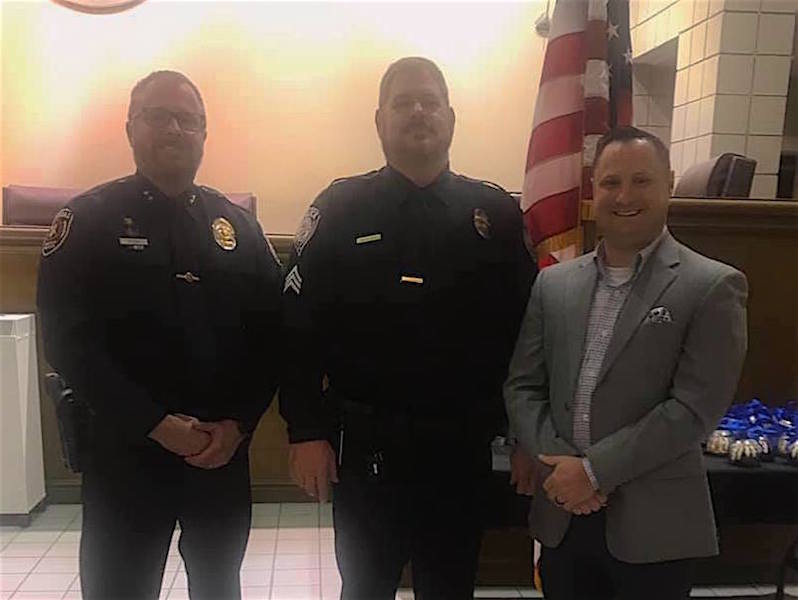 Helena Police Officer Will Ratcliffe was recently promoted and sworn in to the position of sergeant after serving with HPD for more than three years. (Contributed)

HELENA— In a ceremony held at Helena City Hall on Dec. 31, Helena Police Department Officer Will Ratcliffe was honored by being promoted to the rank of sergeant.

According to HPD Chief Brad Flynn, Ratcliffe has dedicated the past three and a half years to serving the citizens of Helena and was more than deserving of this promotion. He will now take on a new role in protecting the city.

“He is very proactive and is always looking for ways to help the department and the city. He took on the role of code enforcement officer in 2019 and has done a great job with it,” Flynn said. “He will soon begin training to be our emergency operations officer and will be going to training around the country in specialties such as terrorism response, hazardous materials and emergency management.”

Flynn has served as the city’s emergency operations officer for the past 15 years, and said that he knows Ratcliffe is an ideal candidate for his new position.

“I know it takes a desire and commitment to go above and beyond the scope of his regular duties to help prepare the city for any man-made or natural emergency, and Will fits that requirement,” Flynn said.  “He is dedicated and will do whatever necessary to get the job done.”

To achieve the rank of sergeant, Ratcliffe went through a promotional exam process, which had several parts including a written exam and an oral review with law enforcement supervisors from around the country.

“It’s a grueling process, and he ranked high enough on the promotional register to be promoted,” Flynn said. “I have the utmost confidence in his skills as a sergeant, and I know he will continue to serve this department and our citizens in the great way he has since day one.”

Ratcliffe has a wealth of knowledge when it comes to policing and law enforcement, which made him the perfect fit to fulfill the different aspects of the new job he is entering, according to Flynn.

“He is a well-grounded family man who truly loves his job. He has a degree from Harvard and could be just about anything else in the world but a police officer. But this is what he feels called to do and we are glad to have him here,” Flynn said.

Brad Flynn sworn in as Helena chief of police