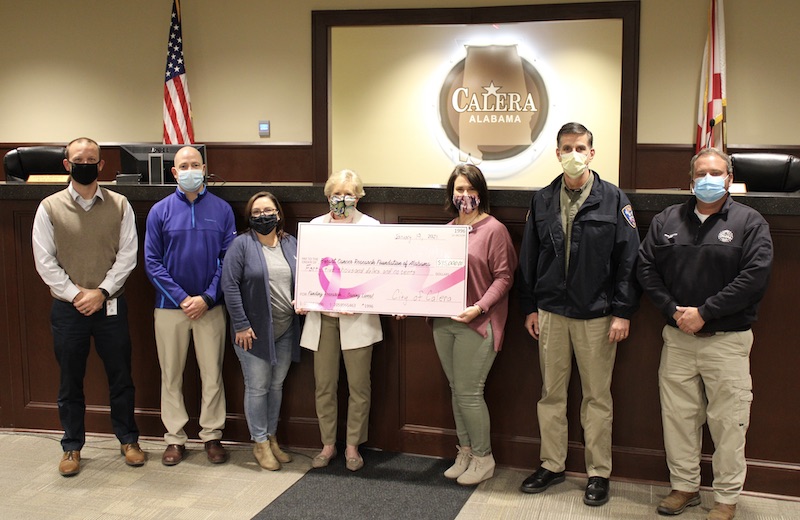 Throughout the month of October, city leaders and residents joined together to raise funds by selling limited-edition 10th anniversary pink T-shirts, which commemorated the city’s efforts in supporting the cause. The group also held a socially-distanced event to assist with fundraising efforts, the “Calera Goes Pink!” Golf Tournament. The tournament, which was held at Timberline Golf Club, welcomed 120 golfers and was presented by Active Air of Calera.

“We are so excited to again be partnering with the Breast Cancer Research Foundation of Alabama,” said Sean Kendrick, Chief of Calera Fire and Rescue. “We’ve worked together with the Foundation for 10 years now, and I look forward to working together for many more in the future.”

All proceeds from the campaign were given to the BCRFA, which funds Alabama-based breast cancer research at the O’Neal Comprehensive Cancer Center at UAB, as well as their collaborative partners.

“This event truly shows the impact of communities coming together for a good cause,” said Kate Kiefer, Board of Directors member for the BCRFA and event chair. “I am thrilled to see the funds that we have raised for research and the relationships that we’ve built while doing it. Each participant, sponsor and supporter should be proud of the great impact we’ve made on breast cancer research.”

Thanks to funds raised in Alabama in 2020, the BCRFA has now contributed over $10 million to breast cancer research in the state since its inception in 1996.

The Breast Cancer Research Foundation of Alabama supports a comprehensive approach to battling breast cancer through support of collaborative and innovative research to help diagnose, treat, prevent and eradicate the disease. Since its inception in 1996, the BCRFA has raised over $10 million to fund research at the O’Neal Comprehensive Cancer Center and with their collaborative partners. All funds raised stay here in the state of Alabama, but the research will have a global, life-saving impact. To learn more, visit BCRFA.org.