Colley is a volunteer at heart

Since retirement, a great deal of 73-year-old Patsy Colley’s time and energy goes into volunteering. At the center of her interests is her work with the United Methodist Women (UMW) organization.

A member of Wilsonville United Methodist Church since 2014, she became president of the UMW in 2016. Once a month UMW provides between 40 to 50 carry out meals to homebound individuals in the Wilsonville community. Members create the menu each month and prepare the food for the meals to be distributed. 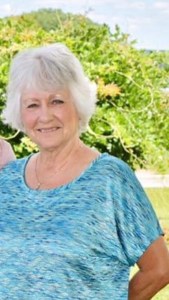 UMW sponsors multiple fundraising events for the benefit of our many missions which include but are not limited to the Shelby County Department of Human Resources and the United Methodist Children’s Home. Their largest fundraiser event is an annual thrift store fashion show and luncheon. The event, which nets approximately $2,000 after expenses, was cancelled this year due to the Coronavirus as was their Soup and Butterbean Day event. Other events include multiple catered meals for multiple entities.

Patsy has been a member of the Fine Arts Club (FAC) of Wilsonville for the past two decades. The FAC mission is to raise money for the Wilsonville Volunteer Fire Department. Comprised of 20-22 members dates back to 1961. Fundraising events include an annual plant and tree sale. FAC is partnered with Wreaths Across America and sponsors a wreath sale, which makes it possible to lay wreaths at the graves of approximately 200 veterans at three Wilsonville cemeteries.

For three years Colley was a volunteer with Son Light Ministries’ food distribution project in Jemison. Between 200-300 families received food each month as they waited for the volunteers to load their vehicles. Additional food distribution efforts began in September. Through the efforts of the town council of Wilsonville food drive committee and The Birmingham Community Food Bank, items such as canned meats, vegetables, sauces, oatmeal, pasta, frozen meats, liquid eggs, fruits and vegetables are distributed once a month to area residents by volunteers like Colley. Recipients drive through and volunteers load food into their vehicles.

“It’s been a blessing to be a part of this endeavor. We’ve been blessed! I thank God by giving back to others. Ever since retiring, my joy has come through volunteering,” she said.

A resident of Wilsonville since 1997, Colley shares her life with her spouse of 55 years, Sonney. The couple have a son, a daughter and twin granddaughters.

Update: Suspect arrested by HPD had outstanding warrants in…