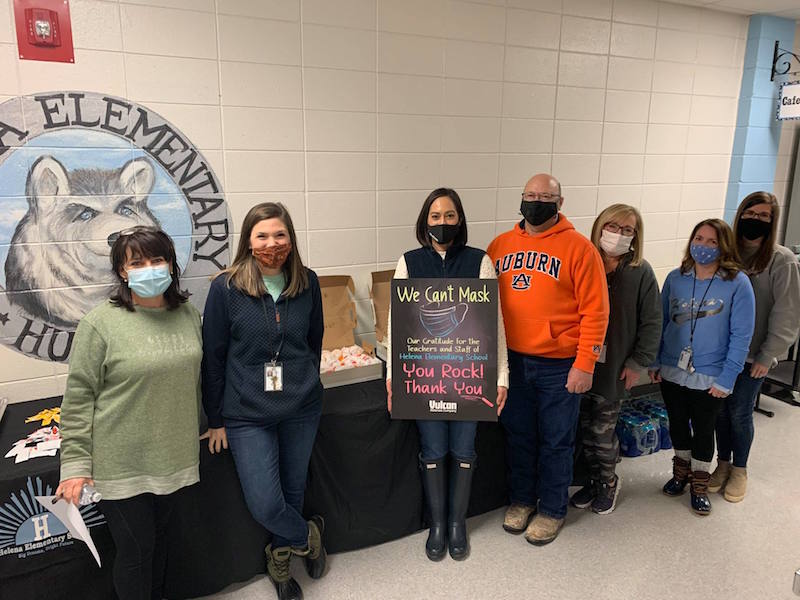 Helena Elementary School has received more than $10,000 in grants this year, while Vulcan Materials has helped provide the school with morale boosters such as supplies and breakfast. (Contributed)

HELENA — Despite some of the issues that public education has faced this year, Helena Elementary School has been able to provide better opportunities for students thanks to thousands of dollars in grants from former State Sen. Cam Ward and Vulcan Materials.

According to school principal Mary Anderson, at the beginning of the school year HES identified technology as one of its biggest needs. With that, assistant principal Brooke Dunham began reaching out to officials to try and get additional funding to help.

“Mrs. Dunham reached out to local legislators to discuss our wants and needs,” Anderson said.  “Ward initially gave us around $3,000 in grants to help with technology needs. At the time, we really needed more Chromebooks with kids doing virtual learning.”

Following this original donation, Ward also was able to present the school with $10,000 more in grants that could be used at the school’s discretion for additional needs.

“It makes a huge impact. Every little bit helps. It has given us the ability to order technology that we needed,” Anderson said. “We were also able to provide every teacher with reading intervention kits to help kids that are struggling readers, in line with a new Alabama literacy act.”

These kits are intended to help teachers better provide lessons to those students who may face more trouble with reading than others. Without the additional funds, teachers would be forced to share, but each now has their own resources.

“The district had already purchased some kits, but I wanted to ensure that every teacher had one,” Anderson said. “That way if they had kids that need it they would not have to share kits and it makes it more convenient for everyone.”

Dunham was glad that the school was able to receive the help it needed after her request early in the year.

“We have had many successes already this year and I would like to thank Cam Ward for one of those. I reached out to him at the beginning of the school year regarding some of our school’s needs,” Dunham said. “This year, he has given over $13,000 in support of our elementary school.”

Another source of donations was the Vulcan Materials Company, who provided not only monetary resources, but additional supplies and morale boosters for the staff as well.

“They brought us PPE, like hand sanitizer for all of the teachers,” Anderson said. “They provided breakfast to our faculty. They have been a longtime sponsor of the school. Every year they do something for the faculty. We don’t always have that kind of funding, so that was a big boost.”

They also provided $1,500 in donations, which was initially identified as helping boost technology needs at the school.