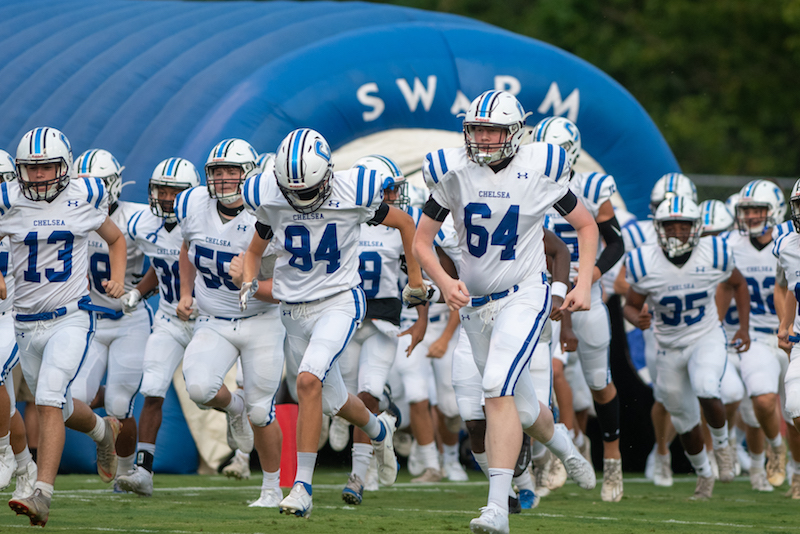 Chelsea will look to improve on last year’s 4-6 record this season against some of the best teams in the state. (File)

The Chelsea Hornets showed positive signs at times during the 2020 football season en route to a 4-6 record, but growing pains and a slow start offensively kept them from making the playoffs.

Competing in the difficult Class 6A, Region 5, the Hornets also faced one of the more difficult schedules in the state and will do the same again this year.

With the challenges that will present themselves throughout the season, a fast start is a must and not getting off to one in 2020 is what hindered the Hornets’ chances early.

Chelsea scored three points or less in three of their first four games of the season, but also picked up a 27-23 win against Helena in the second week of the season.

Showing more consistency early this season and finding an offensive rhythm while the defense gains experience will be key early, and there won’t be any easing into it.

The Hornets will open the season on Friday, Aug. 20 with a rivalry matchup against Class 7A Oak Mountain in what has become a fun county battle to kick off the season for the last five years.

Oak Mountain, however, has had the advantage of being a classification higher and it has shown with an 8-1 record all-time against the Hornets.

The Eagles have won the last four in a row, while Chelsea has scored 10 or less in each of those matchups.

Chelsea’s only win came in 2016 with a 49-33 victory with one of the best offenses they’ve had in recent history.

This year, the Hornets may have their best offense in a few years with head coach Dustin Goodwin returning a quarterback for the first time in his tenure, but Oak Mountain will also be improved with the return of Evan Smith at quarterback for the fourth year in a row and a stacked defense.

Chelsea’s best chance will be if the offense shows up and plays up to par after the only points last year came from the defense on a safety.

It won’t get any easier in week two for the Hornets, as they’ll travel to Helena on Aug. 27 for a county battle.

The Huskies will be looking for redemption after last year’s 27-23 loss, but the Hornets may be better offensively this year, which should lead to a good test for both teams heading into region play a week later.

Chelsea holds a 5-2 edge in the series dating back to 2014, but lost two in a row before last year. The last four games have been decided by seven points or less, so if history tells us anything, it’s that this should be an exciting battle.

The Hornets will remain on the road a week later to take on their biggest rival when they travel to Briarwood on Sept. 3 for a third consecutive matchup against a county opponent.

The two teams have met 33 times since 1978 with Briarwood holding a 23-9-1 record against the Hornets.

The Lions have also won three of the last four, while Chelsea won 17-14 two years ago before being forced to forfeit the game later in the season, only adding fuel to the rivalry.

Each of the last four games has been won with the victorious team scoring 20 points or less, but with two offenses returning loads of talent, this year may see a different outcome to kick off region play.

The next three weeks of the season will see the Hornets return home for two games, which will be sandwiched around a bye week.

On Sept. 10, they’ll host Homewood in a key early-season region matchup that could determine a playoff spot later in the season. The Patriots are 3-0 against Chelsea with all three matchups taking place in the last year.

After a bye week, Chelsea will welcome another county foe and rival, the Pelham Panthers, in a non-region game.

The two teams have met the last five years in a row, and each one has been a scoring fest. Chelsea’s two wins have come by scores of 55-35 and 64-38, while the Panthers have scored at least 36 in each of their three wins.

Last year’s game was another back-and-forth battle for a while, but Pelham flipped a switch in the second half and went on to win 47-28.

Chelsea will then hit the stretch of the season where a light switch seemed to flip a season ago.

After a 1-4 start last year, the Hornets finished 3-2 over the second half of the season, including back-to-back wins against Woodlawn and Huffman.

This year, both of those region games will take place on the road Oct. 1 and Oct. 8, respectively, but it should mark another opportunity at two important wins, which could become big if they are able to win one of their first two region games.

Chelsea will cap off region play with back-to-back home games against Shades Valley on Oct. 15 and Mountain Brook on Oct. 22.

Shades Valley beat the Hornets 35-12 last year as a surprise team, while the Spartans took them down 35-21 en route to winning the region title.

Chelsea will then close the regular season with a road trip to Calera on Oct. 29 looking to continue a win streak against the county opponent.